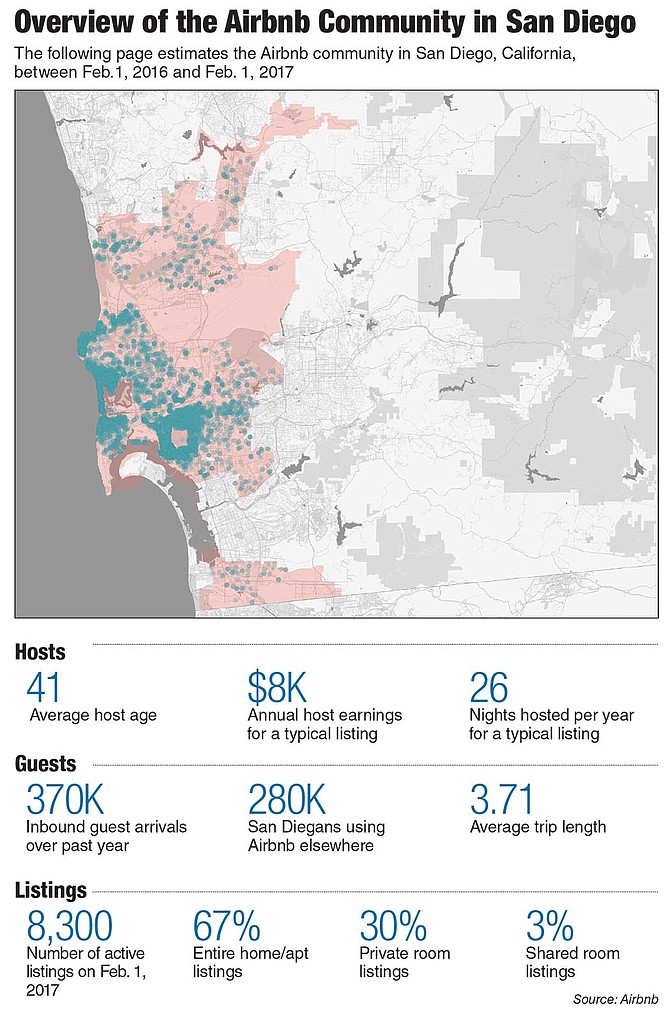 San Diego — Faced with continuing complaints from local residents about noise and other nuisances created by vacationers using home-sharing sites such as Airbnb, the San Diego City Council later this month will tackle a proposed multipronged approach, including new registration fees and steep penalties for noncompliance by property owners.Like other cities nationwide, San Diego has struggled to address long-simmering clashes between permanent residents and temporary visitors staying in their neighbors’ shared homes, especially as Airbnb, VRBO and similar sites have gained prominence over the past five years.

Clashes have been most prevalent in tourist-magnet cities like San Diego, which according to Airbnb ranked fourth in the nation for local guest usage this past summer, with more than 187,000 booked stays. San Diego alone had 8,300 active host sites on Airbnb as of February 2017, a figure that has likely since grown.

The stakes are considerable: a 2015 study by San Diego-based National University estimated that home-sharing sites have an annual economic impact of $285 million in the city. Airbnb reports that San Diego visitors using its service this past summer — the region’s peak tourism season — generated more than $110 million in economic impact, including $72 million in guest spending.

After previously working with Airbnb and other sites to collect required hotel taxes, San Diego officials are now — following several previous failed legislative proposals — attempting to strike the correct balance between the rights of longtime residents in several neighborhoods now dealing with the excesses of part time visitors, and the rights of homeowners to earn extra income in a city where the costs of living continue to rise.

On Oct. 23, the City Council is expected to discuss a measure spearheaded by District 3 Council Member Chris Ward, and supported by councilmen Mark Kersey, Scott Sherman and David Alvarez.

The proposal’s principal goals include preventing absentee landlords from turning multiple properties into year-round shared accommodations, especially in residential neighborhoods where most property owners live in their homes. Another aim is helping the city deal with a chronic housing shortage, by imposing impact fees on property owners, similar in purpose to fees paid by developers.

“The opportunity to use properties as (short-term rentals) has taken entire houses, condos and apartments off of the long-term housing market and, in some instances, they have become neighborhood nuisances,” Ward and the other councilmen said in a recent statement. “Without regulation, these STR opportunities could diminish neighborhood quality of life and exacerbate San Diego’s housing crisis by reducing supply and in turn increasing prices.”

A spokesman for Ward referred the San Diego Business Journal to a recent op-ed piece by the council member, published by Voice of San Diego, in which Ward said escalating fines for homeowners and renters — and possible permit revocations — “will quickly quell bad actors from continuing operation and incentivize all owners and visitors to follow a strict good-neighbor code of conduct to address trash, parking and after-hours noise.”

The proposal aims to curb problems not addressed in city codes that pre-date the rise of home-sharing by several decades. Among other requirements, short-term stays would be required to span at least three days in coastal and historic zones of the city.

San Diego would create a comprehensive online permitting and enforcement process for whole-home short-term rentals, and require a special permit in those instances. Short-term rental permits would be capped at three per homeowner. The council proposal recommends a permit fee that would escalate, with the first fee set at $100, the second at $250 and the third at $500. The fee is in addition to existing transient occupancy taxes currently being collected.

Anyone applying for the permit would be required to have ownership in the property for at least one year before application, unless the property is also the owner’s primary residence. Permits would be assigned only to individuals, not commercial operators.

A portion of the fees would go toward paying for law and/or code enforcement officers who would work nights and weekends to respond to complaints. The council members are also recommending an additional impact fee of $5 per rental night, to be deposited into a new affordable housing fund.

Police would issue citations to homeowners and renters for noise and other verified nuisances. Fines would escalate — possibly a $1,000 fine to the renter and an initial $1,000 fine to the property owner, escalating to $2,500 for a second offense and $5,000 for a third offense. A third offense in a 365-day period would result in revocation of a property owner’s permit; continued operation after a third offense could result in civil penalties and/or judicial remedies.

Rachel Laing, spokesperson for San Francisco-based Airbnb, said the company is working with San Diego City Council on ways to address neighborhood impacts within the regulatory structure that the council will be considering. “The vast majority of our guests are respectful of the neighborhoods they visit; however, when there are issues, we want to be sure there’s a strong enforcement mechanism that addresses them,” Laing said.

Laing said enforcement and funding mechanisms in the council proposal would likely deter hosts and guest from behavior not suited to neighborhoods.

Among those closely watching the upcoming City Council discussion will be leaders of the Short Term Rental Alliance of San Diego, which currently represents about 660 local residents who share their homes via sites including Airbnb, VRBO and HomeAway.

Alliance co-founder Belinda Smith said members agree that it’s time to put in writing some thoughtful regulations that preserve the benefits of short-term rentals for hosts and visitors, while making operators accountable for potential negative impacts. She lauded the efforts of the city lawmakers, but said the group has some concerns that it will be raising with the council, on issues including the proposed nightly impact fee, which at its current level of $5 would make it among the highest in the country.

“We are also concerned about the limitations in historic districts and the coastal zone,” Smith said. “It limits the ability of families to enjoy weekend getaways.”

Here are key provisions of a proposal by four San Diego City Council members, slated to be discussed later this month by the full council:

Zoning: Calls for clarifying where renting all or a portion of one’s primary residence will be allowed, and providing standards for operation. Recommends defining short term rentals as those spanning 29 nights or fewer. In coastal and historic districts, a three-night minimum stay would be required for short-term rentals.

Building occupancy, code standards: Recommends occupancy limits of two adult occupants per bedroom, plus two in the home. Homes with more than four bedrooms would need a Process II Neighborhood Use Permit.

Permitting: Calls for the city to create a comprehensive online permitting and enforcement process for whole-home short term rentals, and require a permit for all such rentals. Whole-home rentals would be permitted as a limited use, and short-term vacation rental permits would be capped at three per homeowner, subject to a permit/registration fee.

Ownership and fee standards: Entity applying for the permit must have ownership in the property for at least one year before application, unless the property is also the owner’s primary residence. Permit must be assigned to an individual, not a commercial operator. Permit fee would escalate, with the first at $100, second at $250 and third at $500. Permits must be displayed in a visible location on the front facade.

Code of conduct: Property owners must provide each tenant with a “good neighbor code of conduct” defining parameters of the stay, including occupancy limits and city regulations regarding noise, trash and parking. Presents potential fines and penalties for noncompliance.

Fees and Taxation: The city will establish a fee to obtain short-term rental permits, which would be in addition to existing transient occupancy taxes and rental unit business taxes. A portion of fees would go toward paying for law and/or code enforcement officers who would work nights and weekends to respond to complaints. Also recommends an additional impact fee of $5 per rental night, to be deposited into a new affordable housing fund.

Enforcement: Police would issue citations to homeowners and renters for noise and other verified nuisances. Fines would escalate ($1,000 fine to renter and initial $1,000 fine to property owner, escalating to $2,500 for second offense and $5,000 for third offense). Third offense in a 365-day period would result in revocation of a property owner’s permit; continued operation after third offense could result in civil penalties and/or judicial remedies.