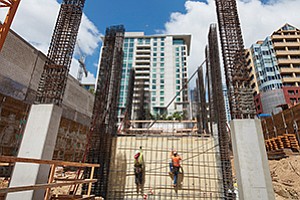 But the “hallelujah moment” he recalls experiencing at the 2010 U.S. Open had nothing to do with the links or the ocean view.

DavisREED Construction Inc., the firm Davis co-founded in 2002 with three other industry veterans, had been selected as general contractor by the Los Angeles Unified School District for a seismic retrofitting program.

“I remember getting the phone call from one of our guys saying we won,” he said.

Even in 2017, years after that project kicked off what would become a major diversification effort at the firm — a bulwark against the impact of future economic downturns — the relief in Davis’ voice at hearing the news remains.

Broadening the type of work the company does within the hospitality sector, building the diversity of the projects the company does in all sectors, and expanding the regions in which it works helped boost the company’s revenue by more than 500 percent from 2014 to 2016, a two-year stretch in which it rose from just shy of $47 million to northward of $284 million.

Since 2015, the company has roughly doubled its roster of full-time employees to 145, spread out among its headquarters in San Diego and offices in Los Angeles, Sacramento and Palm Desert.

But it wasn’t always clear the firm’s effort to execute a pivot from its signature high-end hospitality projects to the construction of institutional buildings would be a success.

“We truly, at times, had wondered: Are we just too much of a fish out of water for this market?” Davis said. “Is this ever going to happen?”

The impetus for the effort was the unexpected halt of the expansion of Thunder Valley Casino in the Sacramento area, a project that had been so significant for the firm that it spurred the opening of its first office outside of Southern California. As the recession took hold, financiers backed off and construction work slowed, especially in the areas in which davisREED had established a presence: California and Las Vegas, Nevada.

“With those kind of ripples going through the financial industry … our project was reduced in size significantly by about $300 million,” he said. “We knew we were going to need to be moving into other things.”

DavisREED faced a steep learning curve as the firm navigated a bidding process in which one of its most valuable assets, the relationships its principals had in the industry, were less valuable than a technical understanding of the language used in public projects bids.

“There’s the difference in the product type, then (in) how to respond in a language and a way in which they understood the point we were trying to make,” he said. “That just took practice. A lot of practice.”

“There was turmoil in the marketplace,” Davis said.

Learning how to put in successful bids for public projects, however, ended up benefitting the company in an outsized way.

“I think it made us a better company in the process,” Davis said. “We got more organized and more deliberate about how we convey our message, and I think that’s been useful to us in other ways.”

In particular, learning to navigate the strict requirements of government work gave the company insight that Davis said helped it when the private sector work returned — this time, with more oversight from lenders than before the financial crisis.

“They’re going to lend money on projects, and they want to make sure they understand who’s going to build the jobs and what their information looks like and what their background looks like,” he said. “If you rewind 15 years, I don’t remember ever going through that same type of security.”

While the financial crisis significantly impacted privately-funded projects, the annual value of public construction didn’t begin falling until later in the recessionary cycle, according to an analysis of data from the U.S. Census Bureau.

In the year leading up to June of 2009, the trough of the recession, the annual value of public construction rose 5 percent. That same year the value of private construction fell nearly 24 percent.

Before the financial meltdown, davisREED — a relatively new firm, although its founders, Davis, Gene Reed, Terry Early and Dan Dalry, had decades of experience — made its name focusing on the hospitality market, building high-end projects such as Hotel Solamar, a Kimpton hotel nestled between the Gaslamp District and East Village.

Although headquartered in San Diego, the firm also did work outside of the region, albeit on a project-by-project basis, such as the Four Seasons Hotel in East Palo Alto.

Traveling long distances to projects and agreeing to furloughs were methods by which the firm maintained its workforce as the industry faltered, Davis said.

Those sacrifices, which allowed davisREED to avoid layoffs, positioned the company strongly to win bids for work once the industry picked up again.

When work began in earnest on the Pendry hotel in downtown San Diego and the Argyle Hotel in Hollywood, both projects the company had begun planning for before the recession hit, Davis said he knew the firm had made it through the lowest points in its history.

Moving forward, davisREED’s aim is to continue to expand the areas in which its employees have experience. Doing so will allow revenue to come from a variety of avenues in which the firm has expertise, lowering the chance a major economic shift will affect its revenue.

“That’s our bucket list,” Davis said, “to have more buckets.”