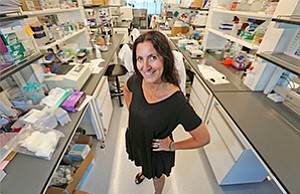 Daré Bioscience CEO Sabrina Johnson thought she had a 6-month task to reach fundraising goals for her company, but it ended up taking two years. She says women’s reproductive health companies often have to look for alternative means of financing in the current climate. Photo by Jamie Scott Lytle.

San Diego — In the field of women’s reproductive health, it can be very difficult to get the startup capital a company needs to get from concept to market.

Companies developing products for contraception, fertility, maternal health, and other women’s products are not getting capital from the same sources as their biotech brethren. With venture capitalists often turning up their noses at women’s reproductive health products, these businesses turn to alternative forms of financing to get the funds they need to survive.

One San Diego company, Daré Bioscience, just completed a rather complicated acquisition transaction in order to get its hands on some much-needed cash. Company President and CEO Sabrina Johnson said it was not how she anticipated raising capital. When she founded Daré back in 2015, she planned to raise money from investors. As a highly-regarded life science executive in San Diego and the former chief financial officer of public biotechs, Johnson felt quite capable of achieving her fundraising goals. She quit her full-time job and went out on a limb to found Daré.

“I thought it would take six months to raise the money we needed,” Johnson said. “It ended up taking two years.”

And in the end, the biggest chunk of cash did not come from investors at all. It came from a financial move called a reverse merger, in which Johnson tracked down a clean shell company to “buy” Daré. The transaction was complicated, but in short: A cancer drug company called Cerulean Pharma (based out of Massachusetts) had recently experienced a clinical trial failure, and was sorting out the best way to wind down its operations. The company was public and listed on the Nasdaq, and it had some cash in the bank. Johnson coordinated a transaction in which Cerulean acquired Daré, giving Daré immediate access to the public markets and the money in Cerulean’s bank. Then Cerulean changed its name to Daré, and Daré’s leadership team took over the company.

This sort of transaction is not uncommon in biotech, but it’s especially useful for companies in women’s reproductive health as a form of alternative financing.

“Cerulean had everything we were looking for; they were a clean company with no debt,” Johnson said. And with two CFO’s on Daré’s three-person leadership team, Johnson said the company was well-equipped to handle the transaction strategy.

“That wasn’t necessarily the plan we had at day one,” Johnson said. “But as we began understanding the knowledge-base in the investor community, and their risk tolerance… it became more evident to us that we should be seeking a reverse merger opportunity.”

Daré joins the vast majority of women’s reproductive health companies that use alternative forms of financing when VCs say no.

“Most VCs are men, and so these are problems that they don’t necessarily understand,” said Jessica Grossman, a longtime executive in the space and CEO of Medicines360, a women’s reproductive health company in San Francisco.

There’s also no big “unicorns” in the women’s reproductive health space for investors to look to, Grossman said.

“If something is hot in the industry, then people want to invest in it,” Grossman said. “There’s never been that much momentum or success stories in women’s reproductive health.”

Grossman added that one reason investors still don’t fund women’s reproductive health is that the space is still considered controversial.

“Many big companies don’t want to get involved in controversial areas, and unfortunately reproductive health is still controversial,” Grossman said.

In the absence of more traditional forms of financing, most women’s reproductive health companies turn to donor money to fund their research, with nonprofits like the Bill & Melinda Gates Foundation and Population Council providing the cash these companies need to grow.

But there’s a gap in the industry. Donors and nonprofits fuel early-stage research for women’s health, and multibillion-dollar pharmaceutical companies invest in commercialization-stage products in this field.

“But no one is investing in midstage or even late-stage development of these products,” Johnson said.

That creates a lack of women’s reproductive health products that actually reach the market, Grossman said.

“We see a lot of technologies that have been funded by donors that are only halfway done, and they don’t have the resources needed to get over the finish line,” Grossman said.

Both Grossman and Johnson said they see this as an opportunity for companies like theirs, as they can pick up half-developed assets that have been abandoned to put in their research pipeline.

In her career as a top executive of nonprofit WomenCare Global, Johnson said she came across tons of products that had promising data but had stalled in development due to lack of resources.

“I started exploring the idea of putting together a basket of products for a portfolio, and then advancing those products,” Johnson said.

A nonprofit called CONRAD (or Contraception Research and Development) introduced Johnson to one such product called Ovaprene. Today, the non-hormonal birth control product is Daré’s lead asset. It has existdata that points to its efficacy in preventing pregnancy, and Daré plans to begin a safety and efficacy trial for the device in early 2018.

Both Johnson and Grossman said the financing challenge in women’s reproductive health is also the opportunity. There is a need for new and competitive products in the field, and few big players are innovating.

That leaves a vacuum for smaller companies like Daré and Medicines360 to enter. And as long as they get their hands on cash to fuel their research, their products could be quite competitive to the status quo.