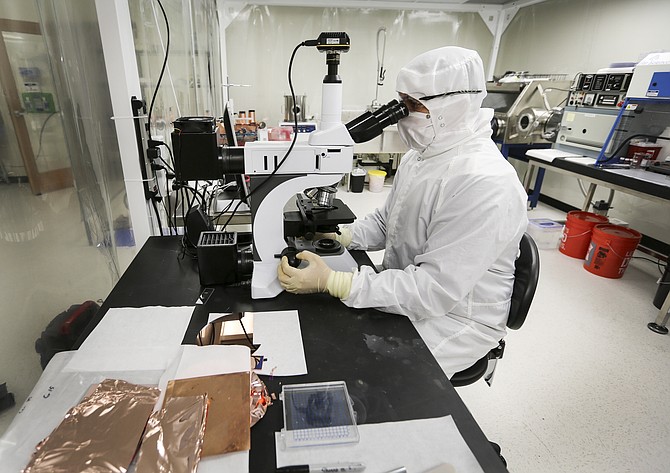 Alex Zaretski, the scientific founder of Grolltex, examines a layer of graphene. The company hopes its material will be used in innovative new electronics, including flexible computer displays and foldable cell phones. -- Photo by Jamie Scott Lytle.

Local investors have forked over an additional $600,000 to San Diego startup Grolltex Inc. as the company begins to scale its operations.

The new money will be used to beef up the company’s equipment and infrastructure, said company CEO Jeffrey Draa.

Grolltex, founded in 2015, is developing a new way to manufacture graphene, the “miracle material” electronics makers go mad for but can’t get enough of.

Stronger than steel, more conductive than copper and more flexible than rubber, graphene has been lauded as the greatest discovery for tech since the silicon chip. The material is basically graphite (think pencil lead), but shaved down to an invisible layer of tightly-packed carbon atoms only one atom thick. The material is infamously difficult to make, but Grolltex said its methods could one day enable mass production of the material.

The latest cash comes from existing investors in a type of investment agreement called a ‘SAFE,’ or ‘simple agreement for future equity.’ SAFEs, a fairly new trend in early stage financing, were first popularized in Silicon Valley by seed accelerator Y Combinator. The agreements are increasingly favored by entrepreneurs because they’re simpler than convertible notes, and they often protect the founders from interest and maturation dates.

Draa said the company also plans to raise a Series A round of financing in mid-2018.

To learn more about the applications of graphene and Grolltex’s manufacturing method, read “Making the Magic.”