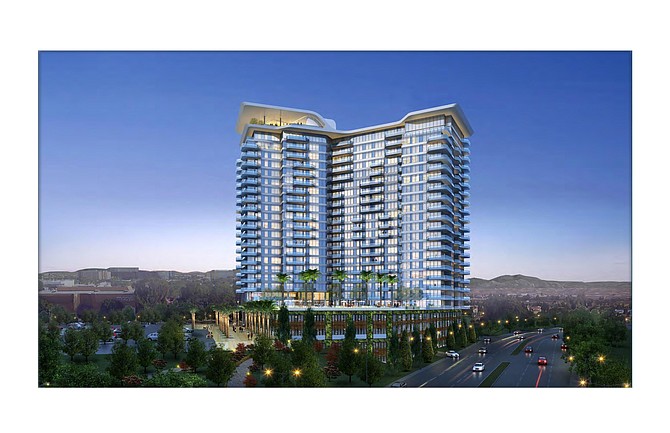 Mall operator Westfield Corp. has broken ground on construction of a new 23-story, upscale residential tower on land adjacent to its mall at University Towne Center. The 300-unit apartment property is expected to open in 2019.

The project begins as Westfield is nearing completion on a $600 million renovation and expansion of the 40-year-old Westfield UTC mall at La Jolla Village Drive and Genesee Avenue. That renovation follows a $180 million mall renovation completed at the UTC site in 2012.

Westfield received city approvals for the residential tower several years ago, but has focused in recent years on retail components at Westfield UTC. Westfield officials have previously said that the apartments, when completed, will bring the Australia-based company’s total recent investments at UTC to approximately $1 billion.

In a company statement, Westfield officials said the apartment tower will be located on Westfield UTC’s southwest corner, at the intersection of Nobel Drive and Lombard Place. It will include studio along with one-, two- and three-bedroom units, with planned pricing not yet announced.

The project includes a landscaped, half-acre pool and amenity deck with a junior Olympic-size pool and spa, outdoor kitchens, grills, cabanas, lounges and fire pits. There will be a high-end “sky lounge” on the 23rd floor with 360-degree views of the surrounding area, along with private dining, a bar and outdoor decks.

Also planned are a casual clubroom on the third floor with indoor/outdoor entertaining space, a media room and sports lounge. The building will also have a fitness center, library, private workspace and conference room facilities, with 24/7 concierge services and private underground parking.

Officials said the start of construction follows a five-year planning effort undertaken by Westfield and apartment developer Greystar, which will also manage the residential community once it opens. Charleston, S.C.-based Greystar has a San Diego regional office and is among the largest apartment operators in the U.S.

The expected development cost of the apartments was not immediately announced, but Westfield officials said this will be the company’s first such project in the United States. Westfield is examining opportunities to create 8,000 homes on land it currently owns across its global portfolio.