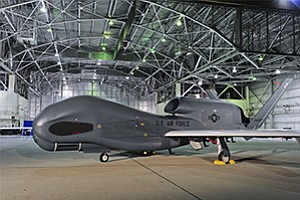 San Diego — Northrop Grumman Corp. is looking into whether its unmanned Global Hawk aircraft could carry a potent laser able to destroy an enemy missile during its boost phase — the initial part of the missile’s flight.

The news comes during a season of heightened tensions between the United States and North Korea.

Missile defense could present a new selling opportunity for Northrop Grumman (NYSE: NOC), whose Palmdale factory is now turning out the Triton, a version of Global Hawk optimized for U.S. Navy reconnaissance. The Global Hawk program is based in Rancho Bernardo.

The U.S. Missile Defense Agency set an Aug. 16 deadline for companies to submit preliminary information on how they might build a high-altitude drone to carry a high-energy laser. Northrop is interested, according to a recent account on the Flight Global website. A Northrop spokesman said the company did not have a representative who could immediately speak on the issue.

Northrop’s challenge, according to Flight Global, will be to modify its Global Hawk to fly higher than it currently does, and to carry a heavier payload.

The Missile Defense Agency wants an aircraft that can fly at an altitude of 63,000 feet for 36 hours, plus have the ability to travel an extra 1,860 miles (3,000 kilometers) between its base and its station. The agency also seeks a payload capacity of at least 5,000 pounds and as much as 12,500 pounds. In public statements, Northrop and the Air Force say the Global Hawk can fly as high as 60,000 feet and carry a 3,000-pound payload.

Defense industry watchers consider Northrop Grumman a plausible contender. Jane’s 360 wrote about the Missile Defense Agency’s plans to buy a high-altitude aircraft in June and illustrated its account with a picture of … a Global Hawk.

The Missile Defense Agency wants its contractor to provide an aircraft by 2023. While it will consider manned aircraft, an unmanned aircraft is “highly desired,” the agency said in its solicitation.

An agency representative referred questions to Northrop Grumman and declined to say how many companies responded to its request.

The Missile Defense Agency also said that its aircraft should:

• Provide 140 kilowatts of power to its payload, and as much as 280 kilowatts for greater than 30 minutes, with no loss of altitude.

• Keep vibration to a minimum.

U.S. Air Force Global Hawks are now doing the work of manned U-2 spy aircraft and may eventually replace them. Global Hawk is very much a San Diego product, initially developed by Teledyne Ryan Aeronautical and first flown in 1998. Northrop Grumman bought Teledyne Ryan in 1999.

A few weeks ago, General Atomics Aeronautical Systems Inc. publicly floated the idea that the military could use its Predator family of unmanned aircraft for missile defense, though there was no mention of lasers. The company said its Poway-built aircraft could provide an affordable platform to detect enemy missile launches.

In other news from late August, Northrop Grumman received a $328 million Air Force contract to develop a next-generation intercontinental ballistic missile — or ICBM — called the Ground Based Strategic Deterrent. The company does the work in Redondo Beach.