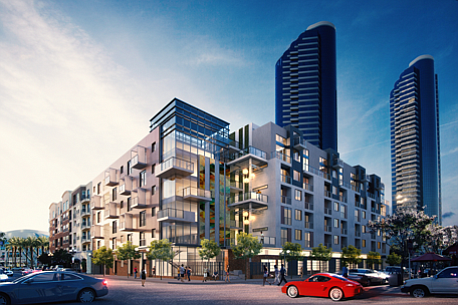 Investment and development firms Legacy Partners and The Resmark Cos. have broken ground on a new $60 million, 168-unit apartment community in downtown San Diego’s Marina District, adjacent to the Gaslamp Quarter.

A statement from the developers said construction on the six-story project began on Aug. 31 at 372 Fourth Ave., with completion expected in summer 2019.

Company officials said the community will include a public plaza, 1,300 square feet of ground-floor retail, a clubhouse, business and conference center, and a fitness room. There will also be a pool, spa, dog park and outdoor kitchen area, along with two rooftop amenity areas with panoramic views, barbecues and fire pits.

According to local brokers, the site formerly contained a building that previously housed a Cost Plus World Market store, which was recently razed.

The new project’s architect is Carrier Johnson + Culture, and the general contractor is T.B. Penick and Sons. This is the second multifamily joint venture development between Legacy Partners and Resmark, following an earlier project in Mercer Island, Wash.

The privately held Legacy Partners was founded in 1968 and is headquartered in Foster City, in the San Francisco Bay Area. The Resmark Cos., established in 1995, is based in Los Angeles and has a regional office in San Diego.