Next year a team of Seals will play at the home of the Gulls, the Valley View Casino Center. 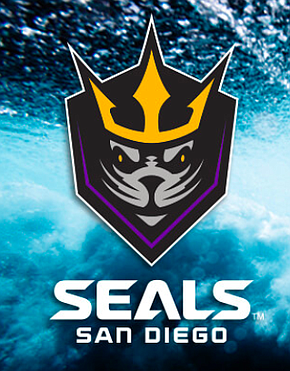 San Diego Seals, that is: the city's new National Lacrosse League team, which plans to make its debut roughly a year from now at the indoor arena in Point Loma.

The San Diego Gulls, an American Hockey League team affiliated with the National Hockey League Anaheim Ducks, has played home games at the arena since 2015.

The Seals' team president, Steve Govett, at an Oct. 24 gathering on the rooftop of La Jolla Cove Hotel and Suites, said the name was selected by team owner Joseph Tsai.

Tsai, a media-shy billionaire who prefers to go by Joe, is co-founder of China-based e-commerce platform Alibaba, one of the most valuable companies in the world.

Bloomberg has reported he paid $5 million for the franchise. Tsai, who splits his time between La Jolla, where his family is based, and Hong Kong, played lacrosse at Yale University and retains a passion for the sport.

It was this interest that introduced him to Govett, who was looking to start another team after 15 years managing the NLL’s Colorado Mammoth team for owner Kroenke Sports & Entertainment.

The NLL announced it had awarded an expansion team to San Diego in late August, the start of a growth phase for the organization.

Since San Diego got an NLL team, the league has announced an 11th team, slated to play in Philadelphia; a third expansion team is expected to be added to the league's roster by the time the two new teams start playing.

NLL league commissioner Nick Sakiewicz has said he envisions the league growing to 30 or more teams over the next decade.

As to what to call the San Diego outfit, “we wanted a name that was inherent to San Diego,” Govett said. “The Seals name acknowledges the marine mammals that live along our coastline, and it pays tribute to the brave men and women who help keep us safe and protect our freedom.”

The team logo is the stylized face of a seal wearing a gold crown. Its background resembles a shield - and the head of a lacrosse stick. Seals colors are gold, purple, gray and black.

The gold, Govett said, is meant to echo the San Diego sunshine; the purple, to reference the color of the Pacific Ocean at dusk, and to pay homage to the Native Americans, the game's inventors, by using a color similar to that of the flag of the Iroquois.

No other NLL team's primary colors are purple and gold.

The logo was created by Adrenalin Inc., a Denver-based agency that also designed the logo for the Mammoth, the team Govett previously headed.

The Seals also have a temporary slogan, intended for use until its first game kicks off: "Surfacing Soon."

In the meantime, to learn more about the new San Diego team, visit sealslax.com.