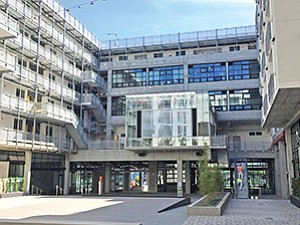 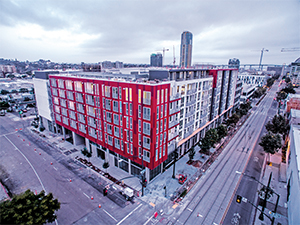 The IDEA1 building seen at downtown at night. Photo courtesy of IDEA1 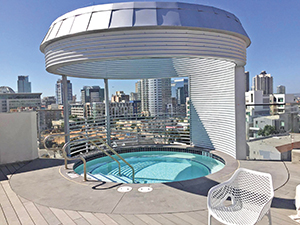 San Diego — A dream that started seven years ago is about to become a reality with the official November opening of IDEA1 – a $91 million downtown San Diego project that combines office space, apartments, restaurants and retail space.

A soft opening of sorts for the East Village project started in September, when people began signing leases on some of the 295 apartments with a move-in date set for Nov. 10.

The biggest chunk of the six-story building will be the 7,700 square feet of first-floor office space taken over by the Philadelphia-based Seer Interactive, a digital marketing company that signed up to make IDEA1 the home of its California headquarters after the company ran out of space in its Little Italy offices.

“I thought we would go into a high-rise building, we’re such a fast-growth company,” Seer Interactive founder and CEO Wil Reynolds said.

That was until he got a look at IDEA1.

“I said, ‘Wow, this is a really great place,’ ” Reynolds said. “It’s very similar to our office in Philly. It’s in a neighborhood that, for a very long time, was overlooked.”

At 1200 F St. and bounded by Park and E and F and 13th streets, IDEA1 is far from a typical combination of retail, office and residential.

At its center is a 13,000 square-foot open-air atrium dubbed the HUB, which developers David Malmuth and Pete Garcia envision as a focal point for the surrounding community as well as the people who live and work in IDEA1.

“As far as we know, that doesn’t exist anywhere else,” Malmuth said. “We said to the architect, ‘Don’t design a building, design a series of experiences.’ We really wanted to get away from the building being the be-all, end-all.

What we’ve done is create a stage and we’re inviting people to come put on a show.”

People can enter the HUB from all sides of the building through wide walkways.

San Diego economist and development consultant Gary London said the open design of IDEA1 with its wide-open HUB is a dramatic change from typical mixed-used office projects, which are closed to the public.

“This is a project that basically tells you, ‘come visit,’” London said. “It will be very interesting to see how it plays out.”

Overlooking the HUB from a second-floor is a glass enclosed “IDEA Box” for conferences and meetings – a space which Malmuth said is a greenhouse of creativity.

“We’re not growing plants, we’re growing ideas,” Malmuth said. “It’s a place that we hope people working on new business ideas, new businesses, can kick things around, use it to brainstorm.”

The second floor also includes a 10- by 17-foot window that turns into a video screen at night, for showing movies and videos to people gathered in the HUB.

Reynolds said he was particularly attracted to the way IDEA1 is open to the community.

“This actually fits our ethos. We’re a very community-based company,” said Reynolds, who created Seer Interactive when the company where he had been working wouldn’t give him time off for the volunteer work in which he was involved.

Reynolds already is planning events for the HUB.

In addition to Seer Interactive, Young Hickory, a North Park coffee and beer café, also will open a second location in IDEA1, and entrepreneur Frank Vizcarra has signed a lease to bring a contemporary Mexican cuisine called Lola 55 to IDEA1.

Malmuth said negotiations also are underway to add a bicycle shop to the project.

“We want to become one of the centers for the downtown bike community, a place where they can come, hang out, do repairs – rides could start here,” Malmuth said.

Other amenities include a roof-top hot tub, a clubhouse and barbecue pits.

IDEA1 is in the heart of a 93-acre IDEA district that covers 35 blocks, bounded by City College, Park Boulevard, Interstate 5 and Market Street. IDEA stands for innovation, design, education and art.

Two buildings of the Makers Quarter portion of the IDEA district are under construction – the $60 million Broadstone Makers Quarter seven-story residential and retail project scheduled to open in spring 2018 and the $23 million Block D, the first spec office building in downtown in many years, which is expected to be completed in late 2018.

The IDEA1 project, designed by the Miller Hull architectural firm, received an award in October from the Downtown San Diego Partnership.

The award acknowledged IDEA1 as “a project that’s making a significant contribution to growing the downtown innovation economy by bringing together a mix of exciting uses,” Malmuth said.

Financing for IDEA1 was provided by LaSalle Investment Management Company, and Los Angeles-based Lowe Enterprises was the development partner.

The site is owned by the San Diego Community College District, which signed a 99-year lease on it with Malmuth and Garcia.

Malmuth and Garcia are already working on their next East Village project – IDEA2, which Malmuth wasn’t ready to discuss.