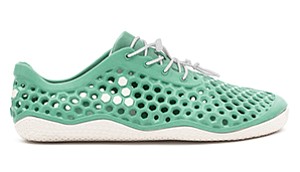 San Diego — Galahad Clark reaches under the table at Swell Coffee Co. in Del Mar and peels off one shoe.

The bearded Brit brandishes the latest iteration of one of his company’s lines of footwear, flexing the thin sole of the pliable, honeycomb-patterned lace-up.

If it’s up to Clark, a member of the Clarks shoe dynasty and founder of London-based minimalist footwear company Vivobarefoot, many more such shoes will be popping up soon in San Diego and other U.S. cities.

A series of serendipitous events has inspired the company to make San Diego its hub for an expansion into the American market.

Customers in the U.S. already buy tens of thousands of Vivobarefoot shoes annually, but the company — which is built around the belief that the thick-soled shoes we wear have made humans less healthy — sees San Diego as a good place to build its brand awareness.

The company sold about 300,000 pairs of shoes in 2016, recording $18.5 million in revenue. Of that, about one-third went to U.S-based buyers. This year Vivobarefoot is on track to sell more than 400,000 pairs and take in revenue of more than $25 million, according to the company.

People who buy Vivobarefoot shoes in Europe tend to buy organic food and exercise regularly. If you bring a reusable bag to shop at Whole Foods after yoga class, you’re probably in Vivobarefoot’s demographic.

But it wasn’t the region’s affluent, athletic consumers that initially drew the company’s attention.

First the company decided to bring distribution in-house after having outsourced it to a company in San Diego. But they decided to keep a local, two-person sales team on a contract basis.

And, the marketing team they use for public relations in the U.S. is San Diego-based Crowe PR.

Getting a Foot in Cleantech Door

Most recently — and this is why Clark was partially unshod in a North County café — the company teamed up with a joint venture called Bloom Holdings LLC headed by local inventor Rob Falken to produce a line of shoes that used algae harvested from polluted freshwater sources.

The shoes, which because they are water-resistant bring to mind a Croc clog that has been reengineered for more active uses than puttering around the garden, became available for sale this week.

Compared with the design that preceded it, Clark claims, the feel of the shoe on the skin — important for shoes that, as the name of the company suggests, are intended to mimic the experience of going shoeless — is smoother. Its cost, $75, is the the same as its algae-free counterpart.

The microorganisms, perhaps best known in California for the harmful blooms they can cause when stimulated by an abundance of nutrients such as nitrogen and carbon, were incorporated into the production of the line in an effort by the environmentally-minded company to replace some of the petroleum-based plastics used to make shoes.

Falken, a materials developer with an environmental bent, was until recently managing director of materials manufacturer at Bloom. That business was formed in 2015 as a partnership between his Carlsbad-based company, Effekt LLC, and cleantech firm Algix LCC, a Mississippi-based company that makes bio-based products from harvested algae.

But in recent weeks the companies ended their relationship. Falken said the closure of Bloom’s San Diego office in Solana Beach came as a “shock” to him and his team there, but declined to comment further. Mike Van Drunen, founder and CEO of Algix, said the closure of the office resulted after he decided to begin managing the Bloom business out of its Mississippi headquarters.

“To date we have 30 footwear brands developing shoes with Bloom, but only a few are located in (California),” Van Drunen said in an email. “This was only a business decision to better serve our customers.”

During Clark’s recent visit he participated in a “swimrun” competition, an event in which teams of two compete to run and swim faster than other teams — without changing what they’re wearing.

Clark believes the next area of growth for swimrun, which has become popular in Europe because of its emphasis on camaraderie and exploring nature against a backdrop of increasingly intense solo competitions such as triathlons, is the U.S. The race recently held in San Diego was one of four that take place in the U.S., according to California Swim Run, which hosted it.

And the sport, of course, is a perfect match for Vivobarefoot shoes, Clark hastens to add. The Ultra — the shoe the company recently released a version of that incorporated Bloom foam — is described as an “amphibious adventure” shoe.

But it’s not the shoes meant for athletic feats that are propelling the company’s revenues: Its best-sellers are its lines intended for everyday use. That’s a positive in Clark’s eyes. He said he would rather people regularly “live barefoot,” (as the company name indicates) or as close to it as possible, rather than pop on a pair of Ultras an hour a day to exercise.

Once someone starts wearing shoes that feel like next to nothing, they are unlikely to reverse course, he claims. But if someone who has always worn padded shoes buys a pair then goes out and runs a marathon, that transition is not going to be pleasant. In fact, Vivobarefoot just came out with an online tool to help people assess what their feet are ready for, based on their flexibility and other physical factors.

Overall Clark sees increasing interest in a more minimal shoe. Irene Davis, a professor in physical medicine and rehabilitation at Harvard Medical School and director of the Spaulding National Running Center who believes people should be barefoot more often, has said she wants this to be “the decade of the foot.”

“We’d obviously like to be part of that,” Clark said. “The onus is on us to get (the shoes) out to people.”