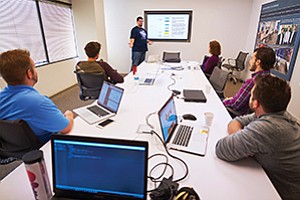 San Diego — Origin Code Academy, a local participant in the popular yet tumultuous industry of coding boot camps, is moving its curriculum online.

Jeff Winkler, founder and C EO, said Nov. 7 the company is adopting a “blended” model that will i ncorporate online course material and occasional in-classroom instruction.

The academy’s curriculum features a variety of technology stacks and programming frameworks.

More than 250 people have graduated since the program, which is based in downtown San Diego, debuted in August of 2015.

About 85 percent received a job offer within 90 days of completing the coursework; for a graduate of the program, the average starting annual salary has been $65,000, according to the company.

In recent years a slew of companies promising programming neophytes an on-ramp to the potentially lucrative digital economy have popped up in cities across the country.

Course Report, which tracks the industry, said in a study published this summer that coding boot camps have become a $260 million industry. The number of people graduating from these programs has grown by 10 times since the first such companies appeared in 2012; about 23,000 people are expected to graduate from coding programs this year, Course Report said.

But some of the programs have struggled to stay afloat.

Dev Bootcamp, one of the early pioneers of coding schools, is in the process of graduating its final cohort. The San Francisco-based company, which launched its San Diego site in 2015, cited financial difficulties when it announced this summer its plans to shutter by year’s end.

“We’ve been striving to find a viable business model that would enable us to further our vision of high-quality, immersive coding training that is broadly accessible to a diverse population, while also covering the critical day-to-day costs of running our campuses,” Dev Bootcamp said in July. “Ultimately, we have been unable to find a sustainable model that doesn’t compromise on one of those fronts.”

Winkler, however, said the impetus behind Origin Code Academy’s transition from in-person teaching to self-led online coursework wasn’t a financial one.

The move to a digital curriculum was intended to make the training more accessible to those unable to attend regular classes, he said.

“We feel that the blended learning model is indicative of where the programmer training industry is headed as a whole,” Winkler said. “With a virtual classroom, there’s less stress involved, and students can master the material at their own pace.”

The company is keeping its classroom space and maintaining its 15:1 student-to-teacher ratio, he said.

The coding school has developed a platform called “Start Now” through which students will access pre-recorded le ctures, take tests and collaborate with other students. Winkler said the platform will also help instructors identify which students need help.

The academy will require students do coursework on-site for the first two weeks; subsequently they will have access to an instructor from 9 a.m. to 9 p.m. daily. Winkler said he expects 80 percent of students will come to do their work on-site anyway, even with the curriculum being presented online.

Access to an instructor to help students when they are stuck is what will continue to set the program apart from other, less expensive online options that offer training in coding, he said.

Previously, the school has offered a full-time program lasting 12 weeks, during which students were expected to code eight to 10 hours per day, and a part-time option, which offered night classes and took an average of 24 weeks to complete. Under the new, primarily online format, students will get 12 weeks to finish the curriculum, although Winkler said if more time is needed, it will be provided.

Origin Code also said it is changing the format of its annual event, called Demo Days, at which local tech employers would sit in on student presentations. Instead, the company will host monthly job fairs where employers and graduates of the program may mix.