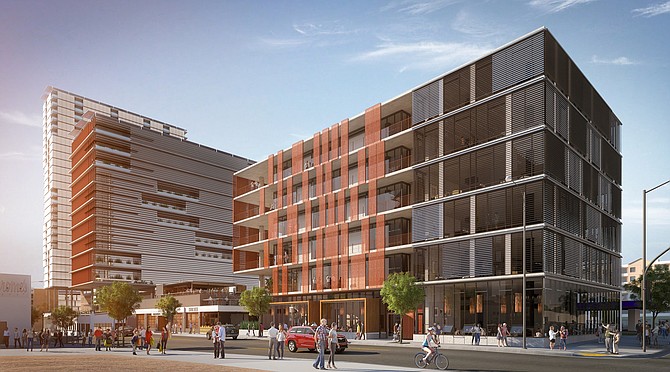 “Block D,” is billed as the first multitenant downtown office building to be constructed in nearly a decade. -- Rendering courtesy of BNIM

Developers of the mixed-use Makers Quarter in East Village have scheduled a May 30 ground-breaking for “Block D,” billed as the first multitenant downtown office building to be constructed in nearly a decade.

Tenants have not been announced for the six-story, 63,584-square-foot office building, to be constructed at 845 15th St. at an approximate cost of $23 million. It is slated to open in spring 2018, according to a statement from the development partnership known as L2HP.

The development will also include ground-floor retail space. The building is designed by architecture firm BNIM and will include sustainable elements related to energy efficiency and indoor air quality.

The building is among several residential and commercial elements in various stages of development within the five-block Makers Quarter. The mixed-use community is in the northeastern quadrant of East Village, where local planners have organized an “IDEA District” geared to innovation, design, education and the arts.

Makers Quarter is being developed on underutilized land owned for several years by the Navarra family, which operates San Diego-based Jerome’s Furniture. At full build-out, it is expected to include 2.5 million square feet of development, including 1 million square feet of creative office space, 800 residential units, and 175,000 square feet of restaurants, retail and entertainment.