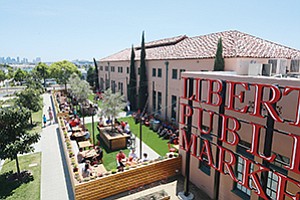 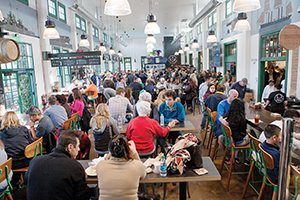 San Diego — A recent report by the consulting firm McKinsey & Co. noted that the gross leasable area devoted to food and beverage outlets in U.S. retail centers could rise to about 25 percent by 2020, compared with just 10 percent today.

With online and mobile-device shopping making physical trips to stores less necessary, center operators are deploying multiple lures — such as food, drinks, games, live entertainment and other social amenities — to get consumers to spend time and money on their properties.

At San Diego’s mixed-use Liberty Station in Point Loma, that assortment of offerings has been combined with an operating mantra that can be summed up in one word: Local. A mix of local culture, local restaurants, and stores selling locally made goods appears to be paying off in the form of rising foot traffic, generated by local residents as well as tourists.

“Tourism follows what the locals are doing, and the visitors want a local experience that they can’t get somewhere else,” said Nathan Cadieux, senior project manager at The Corky McMillin Cos., Liberty Station’s master developer.

Cadieux said the San Diego developer’s initial instinct to go local in its tenant selection was reinforced about three years ago, when it commissioned studies by local consulting firm Stitch Marketing + Research. Community surveys led to the conclusion that developers would do well to first do right by local residents, starting with those living closest to the former Naval Training Center.

The emphasis on curated, local experiences is typified by the open-air Liberty Public Market, which opened a year ago in a renovated former mess hall. It now brings steady customer traffic throughout the week, especially on weekends, to its counters operated by about 30 primarily local vendors selling fresh meats, produce, wines and an array of prepared foods — ranging from empanadas to pizzas and Asian noodle dishes.

While he didn’t have an official estimate on customer counts, public market operator David Spatafore said foot traffic has been steadily increasing as visitors have spread the word, and as other new eateries continue to open nearby. Spatafore said the market, in terms of customer flow, has also helped tie together portions of the sprawling former military complex that previously were isolated from each other.

Tastes of the Town

To keep those customers coming back and sticking around, Spatafore has also brought in live music and exhibits by local artists. He’s looking to build on large-group business with more gatherings along the lines of recent “Nerd Nights,” a local version of “Ted Talks,” where speakers on tech, pop culture and social issues have helped bring in some good-sized weekday evening crowds.

In addition to Liberty Public Market, all of the full-service restaurants that have joined Liberty Station’s lineup during the past four years are operated by locally based companies. Those include Stone Brewing Co., The Patio Group, Consortium Holdings and Rise & Shine Restaurant Group.

Combined with numerous cultural components overseen by the nonprofit NTC Foundation, in an area of the property known as Arts District Liberty Station, Cadieux said the local restaurants have helped create more reasons for visitors to stay longer.

The restaurants, he said, have recently been complemented by the opening of stores such as Moniker General, which sells locally made lifestyle and home goods. McMillin Cos. has added nearby fire pits and other gathering spots to further encourage socializing and lingering — and ultimately spending.

“In the arts district, the aim was to have things that would make people want to stay at least three hours,” Cadieux said.

That goal is different, for instance, from Liberty Station’s original Vons-anchored strip center fronting Rosecrans Street, where the aim is to get people in and out in 30 minutes or less due to parking and other customer considerations.

Ultimately, Cadieux said the critical mass of new visitors and venues should also help the developer with future office leasing at Liberty Station, with workers able to park once and meet all of their lunch, shopping and other errand needs in the same place.

Over the past 10 years, a 100-acre section of the former military base has been repurposed to where it now includes 140 galleries, museums, artists and nonprofits. Those cultural tenants are located alongside boutique shops, restaurants and cafes within 45 newly renovated buildings.

Liberty Station in the past two years has added a new movie theater and public ice-skating rink, and in the next few months is expected to see construction of a planned new barracks-themed hotel. The NTC Foundation, which oversees most of the cultural programming and improvement work in that part of Liberty Station, now organizes several popular public events throughout the year, including art walks, concerts, movie nights and holiday gatherings.

The changeovers taking place at Liberty Station follow several multimillion-dollar renovations completed at popular San Diego County retail centers over the past five years, aimed largely at making them more conducive to socializing and just staying on the premises for longer stretches.

In Carlsbad, owner Rouse Properties has an extensive renovation underway at the 46-year-old mall now known as The Shoppes at Carlsbad. Dining and entertainment are significant parts of that makeover, with recently opened or signed tenants including Dave & Busters, The Cheesecake Factory and Yard House, and Rouse is also creating new plaza areas with trees, outdoor seating and ambient lighting.