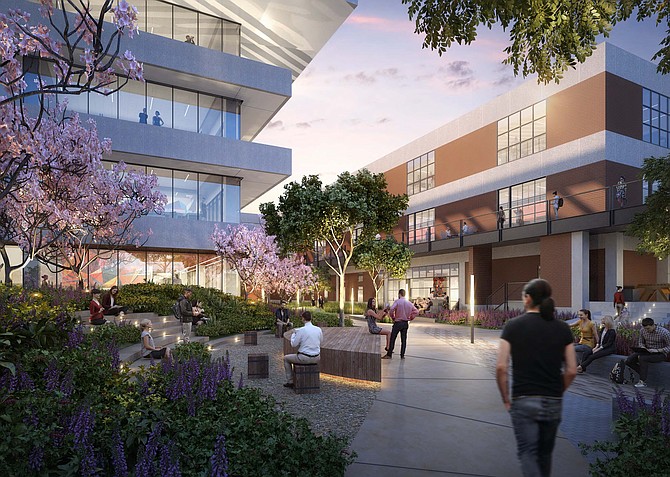 San Diego developer The Casey Brown Co. is nearing completion on the first phase of a $35 million redevelopment of the former Mission Valley home of The San Diego Union-Tribune.

Brokers at CBRE Group Inc. said the former newspaper campus is being redeveloped into a two-building, 330,000-square-foot office campus known as Ampersand (the actual name has & in place of the letter E) off Interstate 8 at 350 Camino de la Reina. Brokers did not disclose the cost of the renovation, but it was recently reported at $35 million by the Union-Tribune.

The first phase is scheduled for completion in the third quarter of 2017 and involves a five-story office tower that housed reporters, editors and other management personnel for more than 40 years, before the Union-Tribune relocated last year to downtown San Diego. The second phase, set for a first quarter 2018 completion, is the renovation of an adjacent three-story building that housed printing presses.

In a CBRE statement, brokers said the interior design of the repurposed buildings will have an “industrial loft-style feel” with exposed brick, concrete pillars, 13-foot ceilings and oversized windows.

The renovated campus will include nine patios and 64,000 square feet of outdoor collaborative space, along with an amphitheater for multi-function gatherings. A central meeting place called the Treehouse is a patio under a massive ficus tree planted by Helen Copley, matriarch of the family that owned the Union-Tribune for several decades.

There will also be a fitness studio with spa-like lockers and showers for tenants, with an on-site coffee cafe, bike center, and concierge services such as valet parking. Leasing is being handled by CBRE’s Matt Carlson, Jeff Oesterblad and Ryan Grant.

The renovation project’s designer is Wolcott Architecture Interiors, and the general contractor is C.W. Driver.

Longtime local developer Casey Brown purchased the 13-acre Mission Valley campus from former owner Douglas Manchester for $52 million in 2015. Brown said he chose the name Amp&rsand for the redevelopment because an ampersand was the final impression made by the Union-Tribune’s printing presses in 2016.

The Union-Tribune is now printed at Los Angeles facilities of its corporate sister publication, the Los Angeles Times.