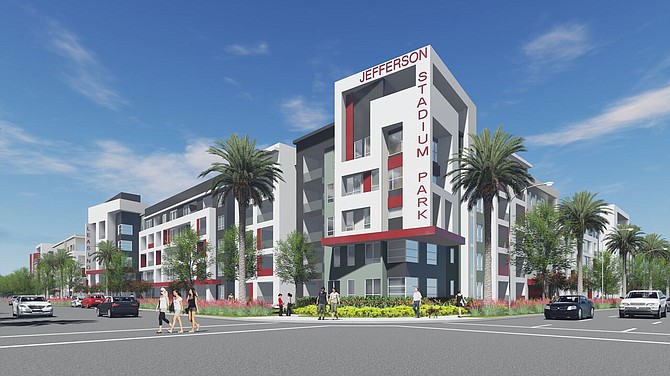 The San Diego-based western regional office of developer JPI has closed on $128 million in construction financing for the first phase of Jefferson Stadium Park, a luxury apartment community in Anaheim.

Texas-headquartered JPI is building the development adjacent to Angel Stadium. A company statement said the first phase will consist of 371 apartments and a 1.1-acre park.

Announced last year, the three-phase, $364 million Jefferson Stadium Park will eventually have a total of 1,079 luxury apartments including 12 live-work units, with 14,600 square feet of community-oriented retail space along with the park. The project spans 17.6 acres.

JPI is partnering with Grand China Fund, a Beijing-based private equity real estate fund, in a $255 million joint venture to develop the first two phases. JPI’s San Diego office has a total of four projects, valued at $675 million, in various stages of development in the area of Anaheim known as the Platinum Triangle.