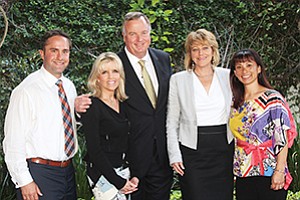 San Diego — More than 300 people attended the fifth annual Serving Seniors’ “Experience of a Lifetime: Uncork Your Support” held recently at the Del Mar Country Club in Rancho Santa Fe. The event raised $450,000, equating to 180,000 meals for vulnerable seniors. The support makes it possible for Serving Seniors to provide 2,300 nutritious meals daily at 10 dining sites and to home-bound seniors throughout San Diego County. Founded 47 years ago, Serving Seniors’ nutrition program addresses hunger and food insecurity, and is one of the agency’s core programs that meet the highly specialized needs of thousands of low-income seniors in San Diego County.

AAM’s Annual Excellence in Exhibition Competition recognizes outstanding achievement in the exhibition format from museums, zoos, aquariums, botanical gardens, and other types of noncommercial institutions offering exhibitions to the public. There were six special achievement awards and one overall award distributed, selected from 32 applicants nationwide.

At the conference to accept the Award were Tomoko Kuta, deputy director and Megan Dickerson, exhibitions manager at The New Children’s Museum.

The Wonder Sound was a collaborative two-year project with artist Wes Sam-Bruce, the museum and community centers throughout San Diego. Visit https://thinkplaycreate.org/explore/art-installations/the-wonder-sound/

In its 24th year, the Golf Marathon for Big Brothers Big Sisters of San Diego County county held recently at Sycuan Golf Resort raised $171,026. Forty-one golfers attempted to golf 100 holes each during the marathon. The most holes golfed was 112 by Jenn Harris, the first woman to win the competition.

The Golf Marathon has raised more than $2.2 million to provide mentors to more than 1,500 children. The event challenges golfers to play as many holes of golf in one day, while raising funds to help match children who are waiting for a mentor from Big Brothers Big Sisters.

San Diego-based Gafcon, a construction consulting services company, announced that the San Diego and Imperial Counties chapter of the American Public Works Association named Marty Glaske, Gafcon’s vice president of labor relations, as the recipient of the 2017 Public Works Advocate Award. The award recognizes outstanding career service achievements of public works professionals who have demonstrated excellence and dedication in their continued commitment to the profession. Glaske and other award recipients were honored at the APWA Annual Awards luncheon held recently.

Gafcon COO Robin Duveen said the award recognizes Glaske’s “20-year commitment to public works in the labor compliance and outreach field, and the quality of services he provides to Gafcon’s clients”

Glaske has been part of the Gafcon team for nearly 13 years. He is an active participant on the Coalition for Adequate School Housing, the Community College Facility Coalition, and various other entities and groups that promote public works projects.

Feeding San Diego announced that it was awarded a grant of $112,500 to support the Feeding Seniors program. The grant is one of 12 awarded by Feeding America and is made possible by funding from the Enterprise Rent-A-Car Foundation. It is the largest investment Feeding America has made to date to support senior hunger programs.

Last year, the Enterprise Rent-A-Car Foundation announced the launch of the Fill Your Tank program, one of the largest donations aimed at fighting hunger around the globe. As part of the program, Enterprise is supporting Feeding America and its network of food banks to strengthen programs aimed at combating senior and child hunger.