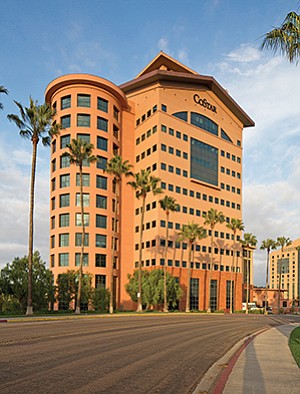 While the exterior of Aventine remained pretty much the same, following an ownership change in 2015, the new owner brought in Gensler architecture for a $6.6 million makeover. Photo courtesy of JLL 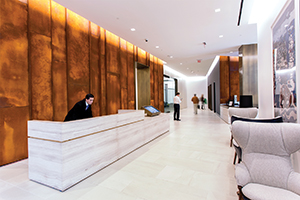 San Diego — Aventine is more than the name given to the quirky, mixed-use complex near UC San Diego.

It’s one of the seven hills of ancient Rome, a concept that offered much inspiration to architect Michael Graves when he designed the 11-acre complex built in 1989 and 1990.

By 2015, the office and restaurant blocks had a new owner. Rockpoint Group spent $150 million on the property and decided it was time for change. It brought in the Gensler architecture and planning firm for a $6.6 million makeover the next year.

The exterior is pretty much the same as it was in 1990, but six of the seven columns in the office building’s lobby — representing the seven hills of Rome — had to go. Only one column held up the building; the other six were for show, recalled Bess Wakeman, executive vice president at JLL.

So the six columns came out. So did all the orange, red and brown marble (still visible in the hotel next door). The lobby went white, with a new corten steel wall to provide a rusty, multitoned patina. Several spaces got new, multiple-section doors which can open wide on sunny days, blurring the distinction between indoor and outdoor space.

Rockpoint also added a lobby café with a big communal table. The result is like a hotel lobby, a place where a person might want to linger rather than pass through on the way to somewhere else, Wakeman said.

JLL invested an undisclosed sum in its own first-floor space at Aventine, pushing ceilings higher and pushing other boundaries. An industrial-sized door converts a conference room to a big, common area. “We spent a few extra dollars to make a real statement,” Wakeman said.

As for the 417-room hotel property at Aventine? The Hyatt Regency La Jolla completed a $12 million revamp of its guest rooms, lobby, common areas and meeting space in 2014. A joint venture of Chicago’s Walton Street Capital LLC and San Francisco’s JMA Ventures LLC bought the property for $118 million in 2015.

Graves, who died in 2015, stayed away from the conventional. “If I had to make glass boxes all day, I’d rather practice law,” he reportedly told a group in Portland, Oregon, where his 1982 city office building is an early example of the postmodern style.