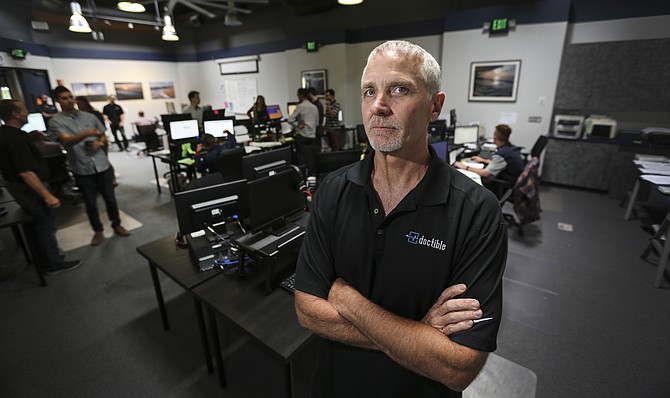 Steve Weber is Doctible’s VP of Sales. Investors say he’s a big reason why they took a chance on Doctible. -- Photo by Jamie Scott Lytle.

Doctible’s lobby is quiet and rather empty (startups can’t afford receptionists), but when the door to the sales room swings open… bedlam.

Upbeat music thumps over speakers while sales reps pound the phones. Standing and pacing with phones pinned to their shoulders, sales reps hawk Doctible’s product: a SaaS product for health-care providers. The company’s platform helps doctors get new patients, better serve existing ones, and automate manual tasks. When a rep closes a sale, someone rings a gong and the room cheers.

“It amps everyone else up,” said Ajit Viswanathan as he’s touring me through the space. “They like to keep the energy high.”

Viswanathan is the CEO and co-founder of Doctible. He’s in the midst of recruiting hard for his sales team. In fact, I was mistaken as an applicant as soon as I walked in the door.

“What spot you applying for?” an employee asked before even saying “hello.”

Doctible’s high energy is one of many things boosting the company’s sales. The startup has experienced 15 percent to 18 percent sales growth every single month for the past seven months, Viswanathan said. The company’s investors are ecstatic.

Here are three things contributing to Doctible’s sales success, according to Viswanathan:

1.) Experience at the top

Doctible was able to attract Steve Weber as the startup’s VP of Sales. Weber is the former founder and CEO of Z57 Inc., one of the hottest local startups during the dot-com era. Weber grew Z57 to 200 employees and $150 million in revenue before selling the company to Constellation Software in 2012.

Doctible’s investors said Weber was a big reason they took a chance on the startup.

“A lot of the times startups are led by younger professionals,” said Hem Suri, managing partner at ClearVision Equity Partners. “But this is the best complement. A first time high-energy entrepreneur (Viswanathan) working with a guy who’s been there done that (Weber).”

2.) Newbies at the bottom

Viswanathan said Weber’s strategy is to hire new graduates who have little to no sales experience, and then train them in-house.

“Most companies hire people who have experience, but we would rather teach them how to sell,” Viswanathan said. “The big investment is spending hours and hours of time in the classroom training.”

The classroom system was something Weber brought to the table. He says its important in ensuring that everyone contributes.

“Steve said ‘We can’t have eight people bringing in all the sales,’” Viswanathan said. “Everyone has to perform.”

Viswanathan said Weber’s training process has allowed the company to build a scalable sales system. The company has a basic algorithm that can predict growth quite accurately.

Doctible employs 21 sales reps, and plans to hire 19 more in the next 60 days.