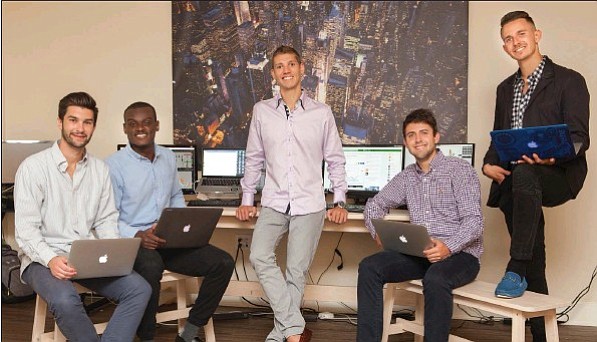 San Diego — TechMeetsTrader, a San Diego software startup, is developing what it hopes will become known as the Facebook for stock and options traders.

CEO Warren Lorenz,a University of San Diego student who started the company in 2016 with other members of the Delta Tau Delta fraternity, was inspired by his experience as a trader to start the network.

The company aims to build a user base with free content and eventually convert some users into paying customers by offering exclusive content, such as live trading rooms featuring expert traders.

Passive investing may be having a moment in the sun, but as a new, digitally native generation of traders enters the arena, education for those interested in active trading has become increasingly popular.

A local startup with a similar mission, mobile stock discovery platform SparkFin, was snapped up last year by StockTwits, the social media platform for investors and traders started in 2009 by financial analyst and investor Howard Lindzon. Terms of the deal weren’t disclosed.

StockTwits CEO Ian Rosen said at the time that SparkFin, which allowed users to build, share and browse curated lists of stocks, was a good fit with StockTwits’ interest in making the community more accessible to newer investors. The previous year, StockTwits launched a site with content aimed at new and casual investors.

“Anyone who is helping to better educate investors is a good thing for the ecosystem overall,” Rosen said.

Lorenz said he first got into trading when he was 16 and recovering from a torn ACL.

“I created a small portfolio and ended up getting really lucky,” he said.

At USD, he studied mechanical engineering, but pursued his interest in financial services with a job at Northwestern Mutual.

It was a stint with Alumnify, a social networking platform for alumni for which he helped a friend raise capital, that led to the idea for TechMeetsTrader, Lorenz said.

But he still traded each morning, and through connecting with more experienced traders through Facebook and other online sites, he found advice that helped him become more successful.

After about a year, he decided to leave Alumnify and apply a similar philosophy — connecting people with similar interests — to his own business, tailored to traders. He did a stint in a software boot camp to learn the basics of programming.

Back in San Diego, for a time, he and TechMeetsTrader co-founder Albert Frimpong worked with a “celebrity” trader to develop a branded platform, but eventually parted ways and decided to use what they had learned to launch the company’s platform.

TechMeetsTrader raised its profile by placing in a number of local pitch competitions, including USD Entrepreneurship’s V2 and UC San Diego’s IGNITE.

“It was validation we had a good idea,” he said. “We had already built software before so all we had to do is reapply it to our own platform.”

The site launched its beta in late January with 1,200 users. It went live in April.

“We saw meaningful engagement, “he said. “We still see people coming back from our first week of launch.”

Andrew Keene, a longtime options trader and CEO of options trading tips and strategies company AlphaShark Trading Inc., has acted as mentor to Lorenz since learning about the company through an event put on by the San Diego chapter of Entrepreneurs’ Organization for college entrepreneurs.

“The concept and idea of what he is trying to do is remarkable,” said Keene, who is based in Texas.

Keene, who has no financial stake in TechMeetsTrader, said a place where new investors can connect with experienced ones to learn the complexities of the various types of trading is invaluable. There’s also a need because of the basic nature of the profession, he said.

“One of the biggest problems when you trade full time is it’s really boring and lonely,” he said. “Usually, nobody is home and you’re strapped to your computer. People are looking out for communities and whoever can build the biggest and best is going to win.”

The site doesn’t sell any investments. Its overall message is to help investors identify their risk tolerance and stick to it, Lorenz said.

“Everybody wants to hit a home run, but if you haven’t tested your strategy and find a niche that works … That’s how you lose money,” he said.

The platform is free, but the company brings in revenue by working with expert traders who allow paying customers to watch their trading activity live in private chat rooms. Raul Rivera, who also works with Keene at AlphaShark Trading, is TechMeetsTrader’s head trader.

The incentive for new investors to use the platform seems clear, but what do experts get out of it?

Lorenz says the site facilitates networking among professionals who focus on a certain style or type of trading. It can also raise their profile: the company partners with traders called “affiliates” who offer exclusive content; TechMeetsTrader splits revenue with those traders.

The company has nine employees, including three developers in Ukraine and another employee in Peru. The San Diego-based employees work out of Lorenz’s Mission Valley apartment.

So far, TechMeetsTrader has raised $400,000; Lorenz says he plans to raise a bridge or Series A round in the fall.

The company’s profile will likely be raised further later this summer. TechMeetsTrader recently scored a spot at CONNECT’s biannual Innovation Showcase, scheduled for Aug. 13, which will feature about 30 companies in the San Diego-Baja region.