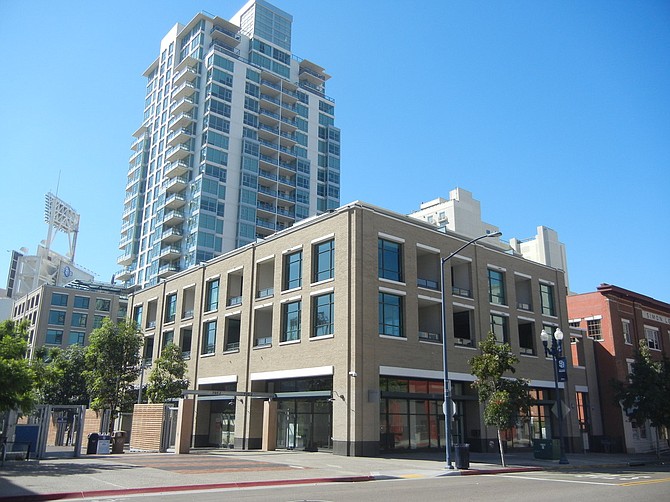 HP Investors acquired the retail and office portion of The Legend mixed-use condo complex in East Village. Seen in the foreground is the building at 325 Seventh Ave. - Photo courtesy of CoStar Group

San Diego-based HP Investors LLC has acquired a retail and office condominium complex in East Village, originally built as part of the mixed-use condo tower development known as The Legend, for $11.4 million.

Sumeet Parekh, managing partner at HP Investors, said the company purchased the approximately 27,000 square feet of retail and office space from Vancouver, B.C.-based Bosa Development, which has built several residential condo projects in the downtown market. This is the first time the commercial space changed ownership since it was completed by Bosa in 2007.

An HP Investors statement said the acquired property includes retail, office and restaurant space at 323-325 Seventh Ave. and 777-797 J St., immediately behind the left-field stands at Petco Park and in front of the stadium’s Park at the Park. The property has several tenants, including J Street Hospitality, BNIM Architecture, Stone Brewing Co. and California Coast Credit Union.

The buyer and seller in the recent transaction were represented by Bill Shrader of brokerage firm Colliers International Group Inc.

This is the 20th property investment in downtown San Diego by HP Investors, which also owns the Sofia Hotel and other properties in the Gaslamp Quarter. HP Investors is also a development partner in the mixed-use Makers Quarter in East Village, where several commercial and residential projects are underway.

Led by founder and Partner Harki Parekh, HP Investors is focused primarily on urban and infill commercial real estate in West Coast markets. The company is headquartered in University Towne Center and has a regional office in Oakland.