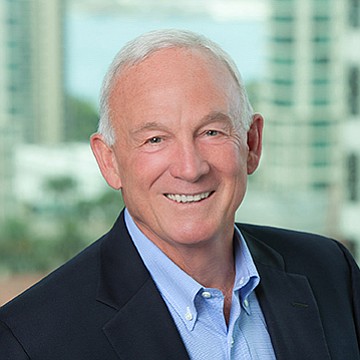 San Diego business leader Jerry Sanders testified at a congressional hearing Jan. 23 that international trade does not necessarily compromise U.S. national security, and that “an efficient border is a safe border.”

Sanders, president and CEO of the San Diego Regional Chamber of Commerce, delivered his testimony to a bipartisan hearing of the U.S. House of Representatives’ Border Caucus. He spoke at the invitation of Rep. Scott Peters, D-La Jolla.

The hearing focused on border economics, according to a news release by the chamber. It said the goal of the proceedings was to counter the Trump administration’s rhetoric and proposals threatening border commerce.

Trump has proposed tightening border restrictions and revisiting the North American Free Trade Agreement with Mexico and Canada. Both ideas have prompted concern in San Diego, because the area does an estimated $5.5 billion per year in trade with Mexico, and many companies in the region employ workers who commute to work from their homes south of the border.

“Our region is a national model for cross-border commerce and an integrated supply chain that depends on efficient trade for the joint production of products,” Sanders said, according to the chamber’s release.

“The tremendous volume of trade that passes through our region each day is a reminder,” he continued, “that protecting national security and promoting trade and economic vitality are not mutually exclusive. An efficient border is a safe border.”

For his part, Peters asserted that the country does “not have to choose between a safe border and one that facilitates prosperous international trade and tourism.”

“By investing in infrastructure and innovative approaches to protecting the border,” the release quoted Peters as saying, “we can have a system that keeps Americans safe and supports the export of goods made in America by American workers.”