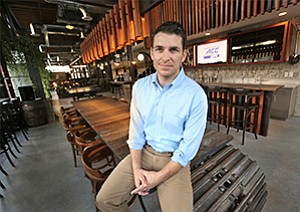 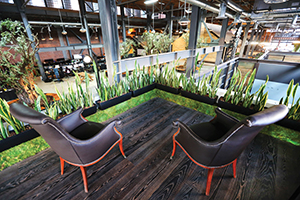 San Diego — Anyone who has walked past Underground Elephant’s new downtown digs knows that the adtech firm is anything but underground.

“We kind of blew our cover,” said founder and CEO Jason Kulpa with a laugh.

The audacious office has become a symbol of downtown’s emerging tech scene, a promise of what’s to come in San Diego’s bubbling startup economy.

Walking into the building in East Village feels like stepping onto a movie set. Ancient, twisting olive trees dominate the cavernous room, making up the front lawn of a massive school house built inside the space. Yes, the office of Underground Elephant has buildings within buildings.

“I wanted to build a village,” said Kulpa, spreading his arms to gesture at the spinning windmill, the school house, and a vintage tractor parked in the lobby.

I’m sitting at the bar in Underground’s east wing, where local craft beer is served by the resident bartender/operations guy, Manny Gonzalez. The sun has gone down, and neon blue lights are blinking in the windows. A big screen TV above the bar is tuned to basketball, and it’s easy to forget I’m in an office.

Kulpa stands the whole time behind the bar, leaning on it for support from time to time. He seems rather comfortable in his larger-than-life village.

But as his company matures, Kulpa has hit unexpected headwinds. He’s adjusted course over the past 12 months, and is keeping his fingers crossed that there’s favorable winds moving forward.

In 2010, the company was a nascent adtech business collecting data from social media sites and using it to funnel customers to its clients. Back then, it had about $9 million in revenue and a 50-person team that worked out of a modest office in Mission Valley. Then in 2013, revenue sky-rocketed to $44 million and the headcount doubled.

The small and scrappy startup transformed into a thriving technology firm on the cusp of middle market. This was the promise of fast-growth, scalable technology, and Kulpa was the hero in his own adtech epic.

But as the company graduated from an early startup to a mature operation, Kulpa was met with challenges that would weigh heavily on any 30-something founder.

For-profit colleges were going gangbusters after the Great Recession, attracting the tired, poor, and huddled masses of the economic downtown. Underground Elephant had cut its teeth on this business, helping for-profit colleges target individuals who might improve their financial situation by going to school.

But as the economy improved, the growth curve for this industry started to slump, Kulpa said. In recent years, the industry was also plagued by negative press. From fraudulent activity (such as advising students to submit false information on federal student aid applications) to offering potentially unemployable degrees, the industry has been a hotbed of controversy.

Kulpa said Underground Elephant distanced itself from the education business when the controversies started coming to light, pivoting into new markets early on.

“I saw the writing on the wall,” Kulpa said. “It was clear that these businesses were going in the wrong direction.”

In 2016, Kulpa cut the cord entirely on for-profit colleges, walking away from a huge chunk of the company’s revenue.

Closing the door on the education vertical and focusing its attention on new opportunities could be exactly what Underground Elephant needs to launch the company into its next growth phase. Revenue has been somewhat flat since 2014, climbing from $55.5 million to above $60 million today as the company shifts gears.

“It’s tough not to have an ego,” Kulpa said. “You want to grow every single year and push revenue. That’s the trick you fall into as a younger CEO.”

But “pause, pivot, reiterate” is a hallmark move of sustainable companies who are faced with fast-changing markets, and Kulpa isn’t wasting any time on industries at the end of their growth cycle.

Underground Elephant has invested its efforts into growing its insurance vertical over the past several years, moving out of education and into auto, life, and home insurance.

Kulpa said the company identified a third vertical to enter in 2016: finance. As the company enters 2017, Underground Elephant is applying its technology to help find customers for credit card companies and other lenders. Considering the company’s $1 billion competitors in the space, this vertical could hold enormous potential for the firm.

Kulpa sat down with me to discuss Underground Elephant’s growth in face of an evolving market. Here are some excerpts:

When did you first realize it was time to shift away from the for-profit education business?

We started shifting into the insurance business in 2011. Even though we felt very bullish about the education space at the time, it was a highly regulated industry. We wanted to leverage our technology and software in the insurance space, so we entered that market.

Then in March of 2016, we saw the curve for insurance take off. At the same time, we saw that education was at the end of its lifecycle.

So you’re completely out of education now?

As of Jan. 1, we’re completely out. We walked away from a lot of money.

That must have been a difficult decision to make. How did you decide that it was the right thing to do for the company?

We want to make money the right way, and they were screwing people over every day.

Was that something you were truly blind to? I mean, this was your target industry.

We didn’t know. Bridgepoint was in our building downtown, and they were crushing it. These companies would send us enrollment data. They’d be like, ‘You sent us 20,000 students this month, and we’ve enrolled 4,000.’ We’re thinking, ‘Great! We’re sending people to college.’ You expect these companies to be doing good, you know?

So now you’re in the insurance business primarily, and you’ve identified another area of opportunity in the lending space. Can you tell me more about that? When did this opportunity come on your radar?

About a year and a half ago. We wanted to apply the same technology and software that had been successful in the insurance and online education sectors (to the lending space).

We want to connect people with the financial services they need online. We drive consumers to banks like Lending Club, and are compensated when those loans go through. Its performance based, so if there’s no loan then we don’t get paid. It’s difficult, it can take a long time, and sales cycles can be up to a year and a half. It’s also very tech heavy.

It’s a big step, but if we’re successful it could be huge for us. Our competitors are companies with a $1 billion market cap. We’re aiming high.

We have to roll with the punches, and know that it might be a year before we’re going to make money in a particular business.

We’re speculating — not just on the customers being interested — but on this industry taking off. We believe it’s a billion-dollar industry for us, so we’re OK with being flat. As a mature business, you get to a point where there’s only marginal growth. Then you have to continue to act like a startup. You have to take risks so that you can continue that high growth.

You’ve been in this situation before, where you took a risk and it didn’t pay off. You recently wrote a blog about pivoting from a B2B model to a B2C model. It didn’t work, you said, and you’ve shifted back to B2B. What happened there?

Our plan is still to go B2C. We want to be a consumer-centric, forward-facing brand just like NerdWallet and LendingTree. We want people to associate the Underground Elephant brand with a consumer portal versus being “underground.” We piggybacked that initiative with our fintech initiative last year. But it was too much to deal with. There was so many resources that we had to put into building a (consumer-facing) brand. At the same time, we were exiting the education business and moving into this new office. It was too much too soon.

It was the right course, but not the right time. You’ll see us roll that initiative back out this year.

You mentioned in a previous conversation that you might raise capital soon. You said $20 million to $25 million. Will this be used for rebranding?

Yes, we’re going to need to make an investment in the brand. We’ll also need to scale the fintech side of the business, so we’ll need capital to buy the medium, reinvest into our software infrastructure, and support that type of growth. We’re also not hiring junior level people any more.

We’re hiring seasoned industry veterans that may have to relocate to San Diego. We’re weighing our options to raise money in Q1 or Q2 of this year. We built the framework – we built this place to be a billion-dollar company. And to compete with billion-dollar competitors, we’re going to need a war chest.