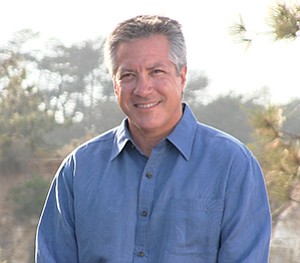 San Diego — Dr. Bob Uslander was meditating on a bluff in La Jolla in early 2013 when he was jolted by an epiphany that would transform his professional life.

The Chicago native had recently turned inward after spending a medical career in emergency-room heroics. He quit watching television and reading the news.

Suddenly, sitting there quietly at the edge of the Pacific Ocean, Uslander experienced a cosmic “infusion.”

“My whole body just felt alert, like there was an electrical energy going through me,” he said.

The message he recalls receiving — that he had been put on Earth to provide compassionate care for people nearing the end of their lives — was reinforced the very next day, when he happened to meet a hospice nurse. The encounter led him to take a medical directorship in the field of palliative, end-of-life care.

So began Uslander’s quest to upend medicine-as-usual for families who can afford better care than what traditionally has been available to them.

In September 2015, Uslander launched a self-styled medical practice, Integrated MD Care, combining aspects of concierge medicine, home health and hospice. If all goes well, and he finds the right people to help him, he hopes to expand this year to Orange or Los Angeles counties, and after that, open branches as far away as Seattle and Chicago.

Personalized attention and medical advocacy are central to his approach. He makes himself available for house calls 24 hours a day, if necessary, and intervenes on patients’ behalf by speaking directly with physician specialists and directing home caregivers.

While hospital treatment may be an option, so are massage, music and other integrative therapies he contracts. Uslander’s focus on providing peace of mind extends to patients’ families: He communicates with them regularly and tries to relieve them of the often-heavy burden of daily caregiving so they can return to being loving spouses and children.

No doubt this level of care can be pricey, with monthly fees averaging $2,500 and some reaching as high as $6,000. Although these costs don’t tend to last long — many of his patients are older people suffering serious diseases that often end their lives within months after he meets them — they can be financially difficult because he doesn’t accept private insurance, and Medicare won’t reimburse his services.

Uslander hopes to establish a charitable foundation that would raise money to extend his services to the financially less fortunate. Still, he recognizes many people won’t ever be able to afford him, even as he hopes to give as many people as possible a “good death,” which he defines as a state of physical, psychological and spiritual comfort and a feeling of completion for patients and their families.

“I feel like we can help people create the best possible experience for their loved ones,” he said, “so that (during their end of life) they don’t have to carry this weight that they could have done something differently, they could’ve done something more.”

Theresa Parmele was in danger of experiencing that kind of regret. Her 88-year-old mother living in Del Mar had been diagnosed with lymphoma in October 2015. Parmele’s mother indicated she wanted to stop treatment and receive hospice care at home. But the family was unable to find a service that would send a physician to her home.

An oncologist who happened to know of Uslander’s services recommended him.

“He was very hands-on,” recalled Parmele, a registered nurse who has worked in oncology and home care during a career of more than 30 years. “He came one time in the middle of the night because she was really uncomfortable.”

Though Uslander had agreed to visit the patient just once a week, he ended up coming twice or three times a week, Parmele said. He pressured the patient’s home health-care agency to hire a caregiver she liked. He persuaded the patient to take her pain medicine, and took other steps to maximize her comfort.

“Even looking back, it was worth every penny of it,” Parmele said. “And she passed peacefully. It was beautiful. It was just the way you want to go.”

Uslander came to California from the Midwest as a medical student at the University of California, Los Angeles. He said he chose emergency medicine because he wanted to feel like a complete physician, one who could “make an impact.” But he began to sense something was missing in the early 2000s, even before he became personal doctor to a friend dying from melanoma.

At the time, Uslander and his wife owned a Northern California home care franchise, Seniority Lifecare at Home, that the couple continues to operate. It taught him about business and the needs of home-based seniors.

Uslander’s transition to San Diego began in 2010, and he was still commuting back and forth from his job at an emergency department near Yosemite when Uslander had his moment on the bluff in La Jolla. As important as that experience was, he said his father’s death from lung cancer in July 2015 was probably a bigger inspiration for starting Integrated MD Care.

Home health and hospice agencies work to put people at ease as they approach their final days. But neither mode of care generally operates in face-to-face consultation with physicians. Instead, family members who call doctor offices outside regular office hours are likely to be advised to call 9-1-1, which is just the intensive medical environment some hope to avoid.

Dr. Mark Kalina, an internist at integrative medical practice Pacific Pearl La Jolla, sees a “huge need” for services like Uslander’s, which he said delivers the kind of personal attention missing even in the highly personalized realms of concierge medicine and hospice.

One benefit, he said, is Uslander’s ability to call up and speak with medical specialists who patients have little hope of reaching directly by phone. Patients nearing death, let alone their families, rarely get that level of access and involvement, he added.

“He’s in particular targeting the sickest of the people. There’s not a lot of services that do that,” Kalina said. “This is a movement that’s well overdue.”

One of Uslander’s patients, 83-year-old La Jolla resident Burt Rodin, was atypical in the sense that he was not considered terminal. But he was having difficulty recovering from a heart valve repair and double-bypass, and twice had to be readmitted to a hospital.

Rodin said every time he called a medical office, he would get a recording. Then he hired Integrated MD Care, and things changed.

Uslander started accompanying him to cardiology appointments and contacting specialists. The first month was expensive, Rodin recalled, but after his condition stabilized a month or two later, the price came down sharply.

The difference in the level of care he received greatly pleased Rodin’s daughter, Mary Rodin. She said Uslander filled an important niche, and that since being in his care, her father acts 10 years younger.

“It’s not something that’s available to everybody,” she said. “That’s unfortunate. But it’s the kind of care everybody should have.”

Number of local employees: Three, plus team of 10 therapists and practitioners working as independent contractors.

Company description: Home-based medical care and advocacy ensuring patients with complex and terminal illnesses, and their families, feel supported and empowered from diagnosis to end of life

Key factors for success: A focus on communication, compassion and common sense care; a business model that allows physicians to practice medicine in a way that gives patients and their families what they want and need.