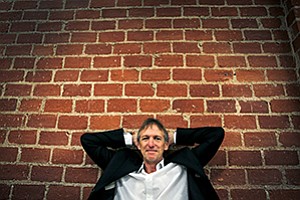 He’d probably roll his eyes at the thought, and start rattling off a profusion of names more influential than his. Everything from the way Krenn talks to the way he sits in a chair conveys humility. But that’s OK, because everyone who knows Krenn serves as his press agent, blasting his admirable qualities to the world. It’s funny how when you don’t toot your own horn, others do it for you.

Dressed in jeans and a loose jacket, Krenn sits low in his seat looking relaxed, with a shaggy border collie named Shoeshine lying at his feet. Krenn and Shoeshine work out of DeskHub, the startup-laden coworking space in Little Italy, with the venture group’s program manager Ariel Ruben. The three get an awful lot done on the limited resources of a nonprofit.

The San Diego Venture Group (SDVG), founded in 1986, connects entrepreneurs with money, and Krenn is relatively new to his post as president. The role he plays — introducing San Diego’s startups to investors — is critical to the city’s economy, as fast-growth startups are the lifeblood of a city’s technology industry (and money is the lifeblood of a fast-growth startup).

At SDVG, Krenn does more than make calls to investors on a startup’s behalf. He’s built a detailed database of venture capitalists that he uses to pair the right investor with the right startup. The database includes loads of useful tidbits, including the kinds of investments a particular VC likes to make, and the best ways to get in the door.

Before learning the intricacies and cultural ticks of the VC community, I used to consider Krenn a middleman. Now it’s clear that he’s a lifeline to a sea of cashless founders drowning in competition. He’s a translator and matchmaker, benefitting both the investor and the entrepreneur.

“Entrepreneurs love having his support, because he’s more than a champion for you,” said startup community leader Neal Bloom. “He’s thinking of ideas for you, and then going out and working on your behalf. He’s pretty selfless in that regard.”

When asked which companies he’d helped raise funding for, Krenn shrugged his shoulders in a Krenn-like show of modesty and said, “Ah, but what is ‘help?’”

Although he hates to take credit, he is likely responsible (at least in part) for the recent $5 million Series A round raised by construction software company eSUB in December. It’s estimated that he contributed to five to six deals over the past year; over the course of his career, Krenn has connected upward of 30 startups with venture capital.

Money and tech talent are two things that San Diego needs more of and Krenn has plans to attract both. But before all that, Krenn took a litmus test of the startup community in San Diego and found SDVG in need of a makeover.

Krenn came to SDVG in 2014, and has been injecting youthful energy into the group ever since. At 50, Krenn is hyper aware of the need to keep organizations like SDVG modern and connected to the community they represent.

“I wanted to diversify and get some young people involved, because the venture group was getting a little old and white,” Krenn said with a grin.

Krenn brought on young entrepreneurs to SDVG’s 50-person board, including Bloom, the regional lead for HIRED Inc., and Derek Barclay, CEO of fintech startup LoanHero.

“Mike’s brought in the millennial voice,” Bloom said. “And that’s important as millennials make up a good chunk of the entrepreneurial scene in San Diego.”

In addition to diversifying the board (adding both millennials

and women), Krenn also started corralling successful startup CEOs into an informal group called CEOs of Quality. These entrepreneurs meet certain metrics of success, Krenn said, allowing committed entrepreneurs to connect and learn from one another on a regular basis.

“He’s bringing together the whole entrepreneur side of the community — a group of strong, venture-backed companies that are intermingling and making connections,” Barclay said.

Krenn has focused on engaging young people on both sides of the table, millennial entrepreneurs and associate-level venture capitalists in their 20s and 30s.

In fact, SDVG’s “Cool Companies” event was chock full of young VCs the past two years. The goal is to introduce a few dozen local startups to up-and-comers in the investment community, thereby boosting San Diego’s “technology brand” with the new generation.

It might seem like Krenn has a pretty good handle on entrepreneurship, and that’s because he’s spent the greater part of two decades coaching founders. Krenn came to SDVG from the law firm Procopio, Cory, Hargreaves & Savitch, where he managed LaunchPad, an in-house program to help startups raise investment capital.

In fact, much of Krenn’s background is in the legal field. At DLA Piper, he founded a subsidiary business called Venture Pipeline that also helped startups raise venture capital. As a marketing director for the Cooley law firm in the 1990s, Krenn helped found the San Diego Band of Angels, which later became Tech Coast Angels, and the San Diego Telecom Council, which later became known as EvoNexus.

You can consider Krenn one of the fathers of San Diego’s startup community (though he’s likely squirming at the thought).

“He thinks in a way that allows long-term initiatives to develop,” said Moore, who’s been a board member of SDVG off and on since the 1990s.

‘A Kick in the Pants’

Krenn came to SDVG with a host of ideas to invigorate the entrepreneurial scene, and 2016 was his year for rolling them out.

“I thought San Diego needed a kick in the pants,” Krenn said, laughing.

One kick came in the form of The Beachhead, a program that opened a satellite office in Silicon Valley where San Diego startups can crash while they pitch the Valley’s huge concentration of venture capitalists.

Krenn said the program is a response to years of waiting for VCs to set up satellite offices in San Diego, and being disappointed when it doesn’t happen.

“Yes, it would be nice if venture capital firms came to us, and I’m totally in support of that,” Krenn said. “But it ain’t happening. It hasn’t happened in 10 years, and people have been talking about it forever. At some point, you have to do something about it.”

Another popular move he made last year was the launch of a tech recruitment campaign known as “San Diego is better.”

The campaign is an unprecedented effort to recruit tech talent from Silicon Valley down to San Diego, with hopes of legitimizing San Diego’s technology brand and adding some fuel to the startup fire.

“San Diego has to become a more recognized technology brand,” Krenn said. “We need to make an impression in Silicon Valley. We have to be up there consistently with powerful messages.”

When asked his plans for 2017, Krenn said his focus will remain spreading the world about San Diego’s technology hub.

“We’re such nice people in San Diego, and we do a really good job of talking about San Diego in our own bubble, but we do a crappy job of selling ourselves outside,” Krenn said. “Rather than being fragmented, trying to tell the world about San Diego, I’m focused on Los Angeles and Silicon Valley. That’s where all the companies are, that’s where all the money is. Instead of whining about this market, let’s turn it around and seize the opportunity ourselves.”

Taking his dog on walks at Sunset Cliffs

Fun fact: Krenn volunteers at the San Diego Humane Society with his border collie, Shoeshine. Together, they visit disabled children at schools.