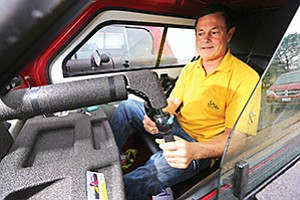 San Diego — For Lon Ballard, it has been a long odyssey in a tiny car.

The nine-year trip has taken him from Thailand to the Philippines, back and forth from China to the United States, and through forests of paperwork and thickets of red tape.

Ballard, 63, owns several companies — including California-based Spira4U LLC — that make a unique, energy-efficient, three-wheeled vehicle with a body made of plastic foam. It’s called the Spira. As a testament to his innovation, he has received two U.S. patents along the way.

Spira’s line of vehicles has included gasoline and electric models. Ballard estimated he has made about 70 of the vehicles and has sold 20, including five to a Ventura pizza chain. Vehicles are made in China with an hour of final assembly in San Diego. Many are on the grounds of his suburban San Diego home.

Ballard said he has invested “many millions” in his business. “It’s my tax write-off,” he said with a laugh. He is able to live off of other income, including real estate development and hotels in Thailand. He said he recently sold some rental units and condominiums.

This year, the former Solar Turbines employee would like to expand his dealer network. His sole dealer is Other Ride Motors in the Sports Arena area. He just returned from the Las Vegas consumer electronics expo to show his creation to a national audience.

He also wants to build a four-wheel passenger vehicle and possibly a lightweight autonomous vehicle for small delivery jobs. Ballard smiles as he talks about a rolling drone that could go down the street dispensing newspapers.

Ballard also seems to be an underdog. At times, it seems big business and big government have joined forces to keep little guys like him out of the auto industry.

“The regulations (pertaining to the auto industry) are made by lobbyists,” Ballard said, and those regulations effectively keep the big players in business and the small players out.

Detailed regulations stacked 18 inches high will affect his project of creating a four-wheel vehicle, he said. There are comparatively few regulations governing two- and three-wheel vehicles, he said, holding his fingers less than an inch apart.

Regulations seem to have stopped production of the gasoline-powered Spira. Following the Volkswagen AG emissions scandal, California and federal regulators have changed the rules, Ballard said. Brother Doug Ballard, who was on hand for the interview, explained that authorities want “a lot more data” on engines the vehicle maker wants to import from China.

An experience in conducting crash tests highlights the barriers to entering the vehicle business. Ballard said he had to put down a $200,000 deposit on a crash test dummy at a private testing facility north of Los Angeles. He got the deposit back after the Spira went through the test.

Part of Spira’s business plan is to work in China. The company has space in a motorcycle factory there and frequently uses that manufacturer’s parts.

The lightweight, molded plastic foam that covers the Spira vehicle on the front and sides is expanded polypropylene, also known as EPP. Thicknesses vary; it’s 4 inches deep on the side. A type of foam-core board makes up the car’s internal structure.

Some people perceive the car as dangerous to drive, particularly in California traffic. People seem to be “brainwashed” into thinking a heavier vehicle means a safer vehicle, Ballard said.

He maintains that the Spira deflects off bigger vehicles in a collision. “You bounce off,” he said. A local TV news outlet recently interviewed a person whose rented Spira was involved in a crash. The driver rolled the vehicle four to six times, and walked away from the wreck. On camera, the driver said he came away with a scratch on his back.

If someone complains the vehicle doesn’t have air bags, Ballard’s retort is “I have half a billion airbags.” They’re in the foam.

Ballard will also argue that bigger cars are killers, because they take lives in wrecks and generate pollution that sickens people.

Ballard originally got going on the Spira project to cut down on the number of motor vehicle deaths in Thailand, where he was living while building condominiums and hotels.

Not too long after that, he learned that the Progressive Insurance Automotive XPrize competition was still accepting entries. His Spira three-wheeler with a gas motor became a finalist in the contest, which sought vehicles that could get 100 miles per gallon or its equivalent.

He continued the project in the Philippines, where he drove an electric-powered Spira 465 miles on a single charge — a world record. The vehicle was not the standard production model. It had a unique bamboo-composite structure.

Looking ahead, Ballard said he thinks his four-wheel vehicle project could have some traction — particularly if he could couple a sale with an estimated $15,000 in rebates. He mentioned three large state and federal rebates for clean-air and electric vehicles that are available.

With rebates, he said, “we could give ’em away,” he said. 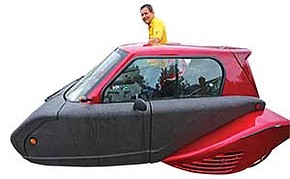 No. of local employees: None in San Diego County; six in China

What makes the company innovative: The company makes the Spira, a three-wheel vehicle built on patented technology.