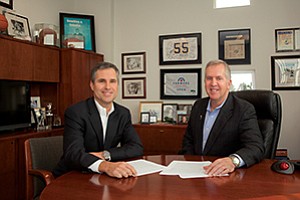 Dowling & Yahnke LLC partners Mark Muñoz, chief operating officer, at left, and Dale Yahnke, co-founder and CEO, say being straight with clients about their disciplined investing style and hiring well-credentialed talent have been the company’s keys to success. Photo by Melissa Jacobs.

San Diego — Investing is a long-term endeavor. So is building a company.

At Dowling & Yahnke LLC, one of the largest wealth management firms in San Diego, hiring the right people is how the company believes it can ensure its long-term success.

The future has been top-of-mind lately for CEO Dale Yahnke, who with Mark Dowling founded the firm 25 years ago at a time when registered investment advisers were the exception rather than the rule. Dowling retired in 2015 at age 63.

Back then, finance professionals worked at traditional wirehouses, selling those firms’ proprietary products to the clients they advised and earning commissions based on the products they sold.

After earning a degree in economics from Claremont McKenna College, Yahnke spent six years with Gray Cary Ames & Frye, today DLA Piper US LLP, one of the largest law firms in the San Diego area. There he worked as a financial analyst representing major brokerage houses, and saw the potential conflicts of interest caused by the commission model. That spurred Yahnke to consider starting a new kind of wealth management firm.

He wanted to be able to offer products that were best for the client, regardless of who made them.

“I was a fan of (investment management company) Vanguard before passive (investing) was cool,” Yahnke said.

Dowling & Yahnke launched in 1991, pledging to charge fees only to clients, not commissions.

Yahnke, the firm’s CEO, said his background as a San Diego native helped the firm get up and running with nary a cold call.

Seeing that clients were willing to work with the fledgling firm on the basis of their relationships with the founders, Yahnke recalls thinking: “This is how we grow.”

The pitch to clients, a relatively unusual one at the time, was to invest in a disciplined manner in the products that would best serve the client. That set the firm apart from advisers who were obliged to sell their companies’ proprietary products.

Admitting his earnestness can come across as corny, Yahnke said “it’s a sacred duty,” acting as a steward for people’s financial resources. “This is people’s life savings. They work hard to create that value.”

Still, while the company clearly has struck a chord with clients — it manages assets for about 1,000 clients and has more than $3 billion in assets under management — Yahnke isn’t shy about telling them when he feels they are misguided.

That happened in 1999, as he and other advisers at the company fielded complaints from clients who wanted more of their assets in tech stocks.

“These are long-term partnerships,” he said, and advisers often are called upon to provide emotional guidance in trying times as well as monetary advice.

Yahnke said the firm refused to “overweight” the tech sector, even though clients were hungering for the higher returns spurred by the internet boom ahead of the dot-com bubble crash.

During 2008, the only year since its inception in which the firm didn’t grow, he advised buying, even as panic enveloped many investors.

“It has been tortoise vs. hare,” Yahnke said, in the mold of the style favored by Warren Buffett, who once wrote of his method of investing: “Be fearful when others are greedy, and be greedy when others are fearful.”

Since then a slew of registered investment adviser firms have popped up as the industry niche has grown, and Dowling & Yahnke is counting on its employees to provide the differentiation it needs to ensure the firm’s continued competitiveness.

Mark Muñoz, a former trader and entrepreneur, joined the firm in 2009 as partner and chief operating officer to assist Dowling as he prepared for retirement.

Previously, Muñoz had spent 10 years on Wall Street, working in New York, London and San Francisco, before moving to San Diego in 1999 with his wife, who is from San Diego.

Once in town, he transitioned to the startup world for a time, launching a wireless company. Once it was acquired, he began looking to re-enter the world of finance and leverage the operational acumen he had developed as an entrepreneur.

He spotted Dowling & Yahnke’s job posting on LinkedIn and began talking with the firm.

“It was a successful firm, a well-known brand with a consistent value proposition,” he said. As importantly, the partners told him they wanted to ensure the firm was scalable as its founders began transitioning out.

“The firm had grown to a point where…you can only wear so many hats,” he said.

He said the firm’s steadfast interest in hiring him, even as the economy was foundering, confirmed their devotion to hiring the right people, even if the timing isn’t ideal.

“They could have said, ‘the world is falling apart; we’ll talk in a year,” he said. “They could have kicked it down the road, but they saw the long-term need to address the position.”

A graduate of the University of Chicago Booth School of Business, Muñoz said he was also drawn to the firm’s interest in well-credentialed hires.

“That really resonated with me,” he said.

The firm pays for employees interested in furthering their education by earning additional certifications, Muñoz said.

Investing in employees is a way to invest in clients, he said, ensuring they are getting the best possible advice.

To that end, Yahnke spends a “significant portion” of his time these days recruiting.

To ease that duty, he likes to keep track of people he thinks have potential, following their nascent careers.

“To grow, you need people,” he said. “That’s the biggest challenge.”