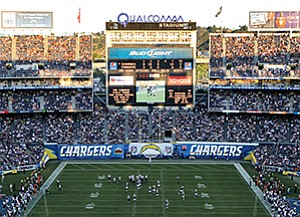 Developer Douglas Manchester’s vision for the Mission Valley site of Qualcomm Stadium calls for renovating rather than replacing the 50-year-old venue, and potentially adding a new arena to host an NBA team.

Funding, renderings and other details of the privately financed proposal have not been released by the longtime San Diego developer’s company, Manchester Financial Group. Such a plan would compete with a detailed mixed-use proposal previously put forward by FS Investors, centered around a brand-new stadium to host a Major League Soccer team and potentially San Diego State University football games.

Manchester’s proposal, detailed Feb. 23 in the San Diego Union-Tribune, came as the development team led by FS Investors took out a legal advertisement in that newspaper officially launching its drive to place its privately financed, $1 billion SoccerCity development before voters.

Starting in mid-March, the developers are aiming to gather approximately 72,000 signatures of registered city voters for a ballot initiative. The San Diego City Council, possibly this June, will have the option of either approving the development plan outright or placing it on a future ballot, likely in 2018 at the earliest.

SoccerCity would also include 3,520 market-rate residential units, 800 student-focused residential units and 480 affordable housing units. The concept also calls for 2.4 million square feet of offices; 740,000 square feet of other commercial space; two hotels with a total of up to 450 rooms; and 55 acres of parkland, including an expanded San Diego River Park and six community recreation fields.

The SoccerCity proposal calls for a stadium with approximately 30,000 seats, which could be expanded and shared with SDSU. The current Qualcomm Stadium would be demolished, but the plan reserves 16 acres on which a new pro football stadium could be built if the city is able to bring in another NFL team to replace the recently departed Chargers.

According to the Union-Tribune, Manchester is looking to renovate Qualcomm Stadium, rather than replace it, to host a future NFL team (possibly the Oakland Raiders), a pro soccer team and SDSU football. He also wants to build a new sports arena on the site to host the NBA, along with other commercial elements at a lower density than FS Investors is proposing.

The Manchester plan includes the same number of residential units as SoccerCity, along with one or more hotels and about the same amount of park space. The office component would span 1 million square feet, with 500,000 square feet of commercial amenities such as stores, restaurants and bars.

Both plans call for purchasing the 166-acre Mission Valley site from the city, with Manchester’s proposal including developers’ assumption of $38.4 million in outstanding debt and related costs for the current city-owned stadium. Manchester proposes spending $500 million to upgrade the existing stadium and designing it to include 60,000 to 70,000 seats, to accommodate multiple sports and other outdoor events.

Manchester’s company is seeking to study the feasibility of replacing the city-owned, 51-year-old sports arena in Point Loma (currently known as Valley View Casino Center) with a Mission Valley venue that could potentially host pro basketball or other types of indoor events.

The NFL and the former San Diego Chargers (recently relocated to Los Angeles) previously advocated for a new rather than renovated stadium in San Diego. The NBA’s Rockets (now in Houston) and Clippers (now in Los Angeles) both departed after starting here.

According to the Union-Tribune, Manchester is looking into financing the proposed Mission Valley development through an undisclosed private source that the developer has also approached to underwrite his $1.3 billion Manchester Pacific Gateway project, the long-planned downtown redevelopment of the U.S. Navy’s southwestern headquarters.