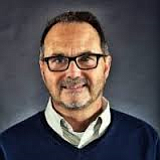 Spitz was most recently CFO of Stone Brewing Co., the 10th largest craft beer brewer in the country, where he helped grow the company from $48 million to $217 million and open its Berlin brewery, the first opened in Europe by a U.S. craft brewer.

The Ken Blanchard Companies and Stone Brewing are both based in Escondido.

Spitz previously worked at Synteract, a Carlsbad-based contract research organization that serves the biotech industry. He earned his bachelor's degree in accountancy from the University of Illinois. He is a certified public accountant in Illinois and California.