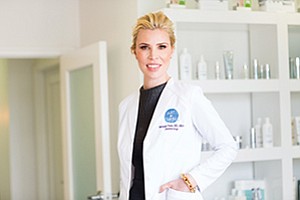 Dr. Melanie Palm is as much entrepreneur as a physician with a medical degree and MBA. She has expanded her dermatology practice from three to eight full-time employees in four years. Photo by Jamie Scott Lytle.

San Diego — Years ago, when Dr. Melanie Palm told fellow physicians she was considering opening her own medical practice, she remembers several being “somewhat trepidatious” about the idea.

What her colleagues failed to appreciate is that Palm was as much an entrepreneur as a physician. She earned her medical degree at the same time as her master’s in business administration. Nothing was going to dim her entrepreneurial spirit.

“I’m kind of the black sheep going into solo practice rather than joining either a consolidated (medical) group … or an academic institution or hospital system,” she said.

Palm is part of a shrinking class of local physicians — most of them specialists — intent on making their own way in the world of health care. Rejecting popular models of medical group membership and hospital affiliation arrangements, they go it alone the way many doctors did in the days before managed care.

For her, at least, the path less traveled has led to success. Her dermatology practice has expanded from three to eight full-time employees in four years, and she is looking at adding patient rooms to her offices in Solana Beach.

Enthusiasm for business sets her apart from many young physicians, but it’s not the only factor distinguishing her from doctors who choose to join medical groups or hospital affiliations.

Her choice of specialties plays a role, as well. As a dermatologist, Palm performs medically necessary procedures and elective surgeries alike. Sometimes she gets reimbursed by insurers, and sometimes her patients pay in full with cash.

Good business sense helps, too. She leaves human resources functions and accounting to others so she can focus on medicine. Palm also maintains a membership in a physician group that leverages their membership numbers.

“There’s power in numbers where you’re negotiating with these insurance companies,” she said.

Palm also keeps a few eggs outside the proverbial basket. At the University of California, San Diego, she lectures as an assistant volunteer clinical professor. She also performs skin cancer, varicose vein and other procedures at a surgery clinic run by the U.S. Department of Veterans Affairs.

Yes, she said, there are headaches that come with solo practice, such as hiring and firing staff, handling her employees’ health benefits and managing the company’s website.

But through it all, she has come to see private practice as a calling and insists she has had no second thoughts. But she doesn’t recommend it for everyone.

“I think, for me, I wanted something different,” she said. “I am too independent to be able to exist well” as an employee.