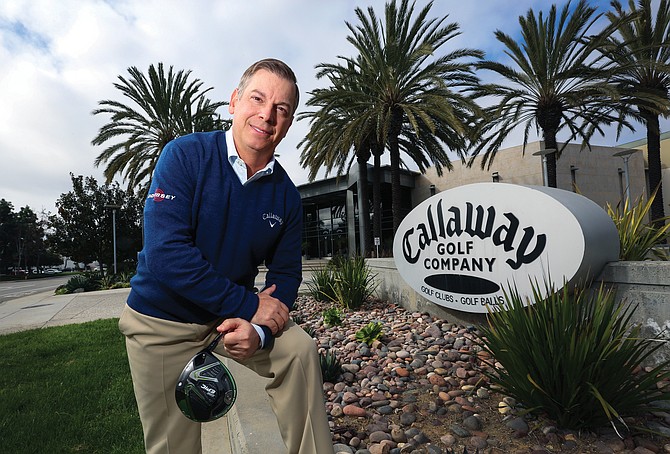 San Diego — Callaway Golf Co. will no longer be strictly defined by the game where the person sends the little white ball in the general direction of a hole.

A healthy percentage growth for the golf industry, however, might be limited to the low single digits, Julian said, so the company sees its future on the periphery of golf.

For Callaway, going off the green doesn’t necessarily mean you’re in the rough.

Callaway sees opportunity in what it calls tangential businesses. The Carlsbad company’s recent acquisition of a Utah company, Ogio International Inc., is a good example. Ogio makes bags. Almost 40 percent of Ogio’s revenue comes from golf products, but Ogio also makes bags for action sports, travel and work. Callaway paid $75.5 million in cash, in a bet that Ogio will be a good fit for the company.

More acquisitions will likely follow, said Julian, Callaway’s chief financial officer. For now, however, Callaway is putting its effort into integrating Ogio. Among other things, the business will be bringing the company from Utah to Carlsbad.

Callaway announced it acquired Ogio in mid-January. The acquisition was fairly complicated, and at seven months, the process took an unusually long time. It was “a bit of a grind,” Julian said.

Callaway, which closed 2016 with $871 million in revenue, expects Ogio to contribute $45 million in revenue in 2017. The company said it expects initial, one-time expenses of $7 million, a 2 cent per share ding out of its 2017 earnings. Ogio should contribute to the company’s profitability after that.

In addition to golf, Ogio makes bags for sports such as motocross riding, biking in its various forms, running, boarding and skiing.

Golf has had its ups and downs. Callaway has weathered changes since the company was founded in 1982, and it has adapted.

Callaway enjoyed annual revenue of more than $1 billion in the mid-2000s. When the financial crisis hit in 2008, its share price sagged as consumers felt they could not afford high-end golf equipment. In 2010, the company restructured and sent much of its Carlsbad assembly line work to Monterrey, Mexico. (The business continues to make golf balls in Chicopee, Mass.) Chip Brewer — the former chief at Adams Golf — took the CEO’s job in 2012, announced more job cuts and oversaw the sale of the Ben Hogan and Top-Flite brands.

Worldwide, golf equipment sales are at $8.05 billion, according to the 2017 World Golf Report put together by Florida-based Golf DataTech LLC. The market could not be characterized as a high-growth market, however. Research and Markets estimates its compound annual growth rate will be 1.97 percent between now and 2020.

The Ogio acquisition as well as a recently concluded apparel joint venture are good ways to diversify, Julian said. Revenue in the golf business is seasonal, with the first half of the year stronger than the second.

Julian also noted the competitive landscape is changing again, with Nike Inc. getting out of the golf equipment business. In May, Adidas Group announced plans to sell Carlsbad-based TaylorMade Golf Co. Inc. Retailers such as Golfsmith and Sports Authority closed shop.

He said companies centered around other things, such as apparel, found golf equipment a difficult business.

“I do think that it says something about the complexity and the commitment to being an authentic, high-quality golf equipment company — that you can’t really do it sort of part-time, or on the side, or to supplement some other part of your business. It’s too hard.”

Julian paused. “But we love it. That’s what we do.”

Part of Callaway’s rebound under Brewer included repositioning the brand. “Callaway did have perceptions to change over the last five years,” said Scott Goryl, the company’s communications director.

Now the company emphasizes the benefits of the product rather than aspects such as aesthetics and style. Julian and Goryl said the company wants to go back to founder Ely Callaway’s four-letter maxim, DSPD. That stands for demonstrably superior, pleasingly different.

Callaway’s job now is to integrate Ogio, and to reassure shareholders that it can bring a company into the fold successfully. It’s still early, but the process is going well, Julian said.

Julian said Callaway has a pipeline of potential acquisitions, but that’s all he would say.

Of course, a person who chases after merger opportunities for weeks or months doesn’t always get them.

Has that been the case with Callaway?

Julian reached for a metaphor outside of golf.

No. of local employees: Undisclosed. Callaway’s global employment is 1,700