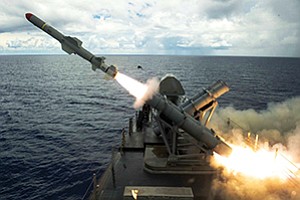 A Harpoon missile launches from the missile deck of the San Diego-based littoral combat ship USS Coronado near Guam in the Philippine Sea in August. An autonomous Fire Scout helicopter helped direct the missile to its target. Photo by MC2 Kaleb R. Staples, courtesy of U.S. Navy

San Diego — It was one more example of how the U.S. military is using unmanned aircraft to stretch its abilities.

During war games in the Philippine Sea, two U.S. Navy helicopters, including an autonomous helicopter system, successfully guided a cruise missile from a ship, over the horizon and to its target.

The delivery of the Harpoon missile to the surface target on Aug. 22 was the “crowning achievement” of the USS Coronado’s maiden, 18-month deployment to the Pacific, the Navy said as the ship returned to Naval Station San Diego on Dec. 5.

The littoral combat ship, or LCS, gets its name from its small size and its ability to operate in littoral — that is, shallow — waters. The first LCS was commissioned in 2008. Since then the ship has been derided by some as expensive, unreliable and fragile; the Coronado is actually made of aluminum, not steel.

The LCS is in fact lethal, said Rear Adm. Don Gabrielson. In a statement from August, the admiral said the Fire Scout extends the ship’s reach.

The ship’s “ability to pair unmanned vehicles like Fire Scout with Harpoon missiles to strike from the littoral shadows matters,” said Gabrielson, commander of the Navy’s Task Force 73. “There are over 50,000 islands in the arc from the Philippines to India; those shallow crossroads are vital world interests. Harpoon and Fire Scout showcase one of the growing tool combinations in our modular LCS capability set.”

Fire Scout comes in two models. The smaller model, MQ-8B, is based on a Schweizer helicopter from Sikorsky/Lockheed Martin. The Navy has stopped production on the B-model and is now acquiring a larger model, the MQ-8C, which is based on a Bell model 407 helicopter.

In October, the Fire Scout carried out tests of an airborne mine detection system.

All in all, “2017 has been a pivotal year for Fire Scout,” Capt. Jeff Dodge, the Navy’s Fire Scout program manager, said in a statement distributed by Northrop Grumman.

Unmanned systems are nothing new to San Diego. Their roots in the community go deep.

Halfway through the 20th century, Teledyne Ryan started producing unmanned target drones. Toward the end of the century it developed the high-altitude, autonomous Global Hawk aircraft, which made headlines in 2001 by flying from the United States to Australia. Northrop Grumman saw promise a couple of years prior to the historic flight, and bought Ryan in 1999. Since then, Global Hawk has gone to work for the U.S. Air Force, crowding out the manned U2 for spy missions.

The Navy is buying its own version of Global Hawk, which it calls Triton. Northrop Grumman runs the Global Hawk and Triton programs in Rancho Bernardo, and it builds the aircraft in Palmdale.

General Atomics Aeronautical Systems Inc. builds its Predator line of unmanned aircraft in San Diego’s North County — most recently Poway. The Air Force experimented with the aircraft in Bosnia in the 1990s and soon found the medium-altitude, long endurance aircraft indispensable for gathering intelligence. Pilots in ground control stations can fly Predators for well in excess of 24 hours. The Predator and its heavier brother, the Reaper, soon began carrying and delivering Hellfire air-to-surface missiles.

Several nations now fly Predator-family aircraft, and GA-ASI is working to interest more customers. The Poway company recently put Predator through an anti-submarine warfare demonstration, and there is interest in using such aircraft for missile defense.

University City-based Kratos Defense and Security Solutions Inc. got into the unmanned aircraft business in 2012 with its purchase of Sacramento-based Composite Engineering Inc. The business makes target drones but is now working on unmanned aircraft that can fly as a “wingman” to piloted aircraft.

Ron Stearns, an analyst with Velocity Group, sees more work ahead for companies building unmanned aircraft for the military.

Between 2016 and 2018, General Atomics Aeronautical Systems is delivering 89 Reapers to the Air Force and 44 Predators to the U.S. Army (which calls the aircraft the Gray Eagle). Such deliveries will wrap up in fiscal 2018. However, the systems ought to be in service for more than 20 years, and GA-ASI will be able to enjoy sustainment business, according to Stearns’ analysis.

Looking ahead, General Atomics is competing against Boeing Co. and Lockheed Martin to build the Navy’s MQ-25 Stingray, an unmanned aircraft that will be able to fly off of carrier decks and refuel manned jets in midair. Such an aircraft will increase the range of fighters such as the F/A-18 Super Hornet. The Navy plans to award the contract for the Stingray in 2018.

After that, Stearns sees growing interest in unmanned aircraft in the commercial sector.