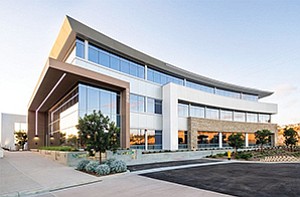 Torrey Point office campus in Carmel Valley is among high-end office projects that are drawing tech companies as tenants. Photo courtesy of CBRE

San Diego — The rapid growth of tech companies, along with their voracious appetite for more and more space in the hottest submarkets in San Diego and elsewhere is driving up office rent prices in neighboring submarkets.

The willingness of tech companies to pay a premium for office space in Sorrento Mesa and downtown San Diego is starting to affect rental rates in Rancho Bernardo, University Town Center (UTC), and Carlsbad, according to CBRE, a commercial real estate brokerage firm.

Tenants in Sorrento Mesa, which CBRE pegged as San Diego’s top tech submarket, pay a premium of 3.3 percent compared to the broader market, CBRE reported in its annual Tech-30 report.

“If tech companies that are used to paying a premium for space in the top tech submarkets are forced to move to adjacent submarkets in order to expand, we could start to see significant rent growth in those more traditional markets as well,” said Colin Yasukochi, CBRE’s director of research who wrote the report.

“Traditionally, Sorrento Mesa has been the top tech market in San Diego. However, we are seeing the majority of new development and redevelopment emerging in tech markets such as Mission Valley, downtown and UTC,” said Matt Carlson, senior vice president of CBRE in San Diego.

“People are spreading out and looking for opportunity,” he said. “If there’s a highly amenitized, well located campus, even if it’s more off the beaten path, there’s probably a market for it.”

The two-building complex — called Ampersand — at Interstate 8 and state Route 163 has been gutted in a $35 million project that will transform it with outdoor terraces, a gym, a craft coffee café, valet parking and concierge services.

“This suburban urban location is attractive to tech tenants because of where it is situated, but also because of the wide variety of on campus and other walkable amenities,” Carlson said. “Tech tenants are now looking for amenity-rich campuses, similar to Ampersand in Mission Valley.”

If a building has what they’re looking for, tech companies are willing to pay the higher rents as they compete for talent, said Ron Miller, senior vice president of Colliers International in San Diego, a brokerage firm.

Among examples Miller cited were GoPro, which he said leased 45,000 square feet of space in the former San Diego International Exchange Building in Carlsbad for more than $5 per square foot, and Tsunami, a developer of virtual reality systems that he said recently leased 35,000 square feet of space in Torrey Point office campus in Carmel Valley, also for more than $5 a square foot.

“You have all these $5 rents, which is something that just two years ago, no broker would have predicted,” Miller said. “These tech companies, they’re trying to find the ‘wow factor’.”

It’s cheaper to spend more on rent than it is to recruit workers or replace those who leave for companies offering more amenities.

“To retain talent is so critical because people are always bouncing around to the highest bidder,” Miller said.

With the right mix of amenities, people might stay with a company even if someone else offers higher pay, he said.

“They may like the environment so much, they won’t want to move,” Miller said.

One of his clients, Mitek Systems, moved from Kearny Mesa to more expensive office space downtown to be closer to the talent pool from which the company recruits.

“They feel that’s going to be a phenomenal recruiting area,” Miller said.

Anticipating rising demand, owners in Rancho Bernardo and elsewhere along the Interstate 15 corridor are investing heavily in upgrading their buildings to add the amenities younger workers want, said Carlson of CBRE.

“The tenants will migrate to where those things are being provided,” he said.

Considering the tight supply of office space in San Diego, Carlson said it’s no surprise that rents are rising.

Over the past two years, overall office rents in San Diego have risen 13.7 percent, according to CBRE, making San Diego number eight in the nation when it comes to rising rents.

Orange County topped the list at 23.3 percent, with California’s Silicon Valley fifth with a 16.8 percent rise in office rental rates over the past two years.

“Our trends are in line with the trends we’re seeing nationally,” Carlson said.

As rents are rising, so is employment in the high-tech/software services field in San Diego - 4.4 percent from 2015 to 2016, the latest figures in the CBRE report.

In a separate report, the commercial brokerage firm of JLL found that even as employment in high-tech companies is rising, the number of college students getting bachelor’s degrees in STEM (science, technology, engineering and mathematics) fields as a percentage of all bachelor’s degrees has held steady since 2011 at 24.7 percent.

Given the higher wages earned by STEM graduates, those findings were a bit of a surprise, said Damon Melda, JLL senior vice president.

“You look at the average wages that they’re making — it’s $30,000 more than the average job — so you’d think there would be a focus, ‘hey, if I want to live in Southern California, these are the types of jobs I need to get,’ ” Melda said.