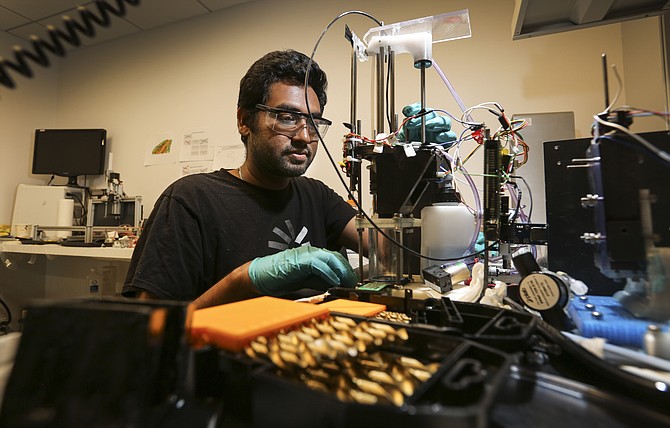 San Diego — EvoNexus, the oldest and most well-known startup incubator in San Diego, is closing its downtown location and consolidating into a new facility in University Town Center.

Advocates for building a tech startup community in the city’s core said they were disappointed by the move and feared it could disrupt efforts to grow and strengthen the space.

The announcement was made in a letter distributed Aug. 8 to tenants of the downtown location. About 15 software startups are housed at 101 Broadway, and the majority will be asked to move to the UTC location by Nov. 1.

The incubator, which offers free office space and a slew of programs for tech startups, is a project of the Irvine Co. It first opened its doors in UTC in 2010, but opened a downtown office in 2012.

Rory Moore, CEO and director of EvoNexus, said moving out of downtown was EvoNexus’ idea, and that the Irvine Co. did not ask the incubator to consolidate.

“We’ve always wanted to combine both locations,” Moore said. “I just couldn’t implement it until Irvine was ready to pay for it.”

The UTC location already houses a majority of EvoNexus’ startups. The incubator is home to a total of 51 companies, with 15 downtown and 14 in Irvine. The rest are at UTC.

Moore said a consolidated facility will allow the organization to make better use of its resources, and not split time between two locations. For example, the incubator hosts educational sessions for founders that could be better attended if everyone worked out of the same facility.

The UTC location is also the first (and only) stop for most venture capitalists and other investors visiting San Diego, said Marco Thompson, a board member at EvoNexus.

“(The UTC location) is our premier facility,” Thompson said. “Probably three times a week there’s an investor who gets a tour of the facility. Sometimes they make introductions that turn into funding events, so having all the fish in one bowl is really valuable.”

The new UTC location is about 20,000 square feet, with office space, private lab space for hardware companies, and conference rooms. The layout is also more conducive to collaboration, with an open floor plan that mimics the downtown location. The former location was about 12,000 square feet (all closed-door offices), and the downtown location was 15,000. So the consolidation is downsizing on space, but Moore said they will have no trouble housing all their startups.

The Irvine Co. and Moore together wrote the letter that was distributed to the tenants of the downtown location, outlining the benefits of moving all companies to the UTC location.

“La Jolla UTC is in the midst of a major transformation that includes a $700 million makeover of the Westfield UTC shopping center, and the addition of modern apartments, office and R&D buildings,” the letter reads. “The area’s renaissance makes it a perfect setting for young companies to grow and for us to build upon our success.”

The downtown location is widely considered the hub of the downtown tech ecosystem. Since the incubator’s debut in the neighborhood, a startup community has built up around it. Coworking spaces, including DowtownWorks, DeskHub, and WeWork, all opened nearby within the last couple of years.

Andy White, the startup advocate for the nonprofit Downtown San Diego Partnership, said the loss of Evo could stymie the hub’s growth.

“I think it’s definitely going to be a short-term hit to the ecosystem,” White said. “Quite a few startups may be moving elsewhere.”

Austin Neudecker, a mentor-in-residence at EvoNexus and the co-founder of Startup San Diego, said that he’s disappointed by the news that Evo was leaving the neighborhood, as they are a “mainstay of the community.”

“Our goal was to build an ecosystem that’s collaborative, and building density is really important to that end,” said Neudecker, who’s also founder of startup Temi.com.

Neudecker, who used to work out of the Evo office downtown, said he will be working out of coworking spaces in the downtown community while he looks for a permanent home for Startup San Diego.

White and Neudecker both said Evo’s departure could spur some necessary changes in the startup community.

“We’ve been very dependent on a few organizations to provide most of the early-stage founder support, and we need to broaden and get more people involved,” White said.

White said he expects Startup San Diego, the Downtown Collaboratory, and the San Diego Regional Economic Development Corp. will all step up to the task.