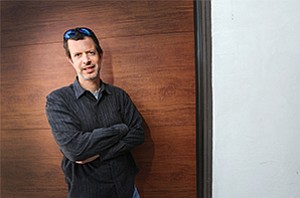 Angel towns emerge in the absence of institutional money, and San Diego certainly has a capital vacuum. While the city brings in about $1 billion in venture capital per year, the vast majority goes to drugmakers rather than tech startups.

Terry Moore, a longtime venture capitalist in San Diego, said there was a time when the city was home to several tech VCs, including Mission Ventures and Shepherd Ventures. But in the late 1990s and early 2000s, those firms closed shop.

With few newcomers taking their place in San Diego, the angel community has stepped to the plate. The city is home to the largest chapter of Tech Coast Angels, the most expansive network of angel investors in the country. TCA’s goal is simple: get angels together in one room so that entrepreneurs only have to pitch once. It saves everyone time. But more importantly, angels can offer bigger checks when they join forces on a deal.

The San Diego chapter wrote $6 million in checks to early-stage startups last year, and this year led the recent $7.5 million round for Echo Labs.

It would make sense for TCA investors to be considered heroes in the cash-starved tech community. But they’re not. Local entrepreneurs hear (and spread) a different narrative in startup circles: don’t waste your time with TCA.

‘Don’t Waste Your Time with TCA’

This is a common thread in conversations among local founders. The feeling was probably best illustrated at a recent presentation given by Dean Rosenberg, a leader at TCA, to an audience of entrepreneurs at EvoNexus, a tech startup incubator.

Nearly all of the hands remained in the air.

There are a few reasons founders hear negative things about TCA, Rosenberg said.

First, the experience is inherently a negative one for 95 percent of those who pitch TCA. That’s because most entrepreneurs who come asking for money get rejected (which is true of any investor group), and that experience is uncomfortable.

It’s hard when an investor turns you down in private over coffee. It’s far worse to be picked apart on stage. Rosenberg compares the experience to being grilled by Simon Cowell on American Idol or lambasted by Kevin O’Leary on Shark Tank.

“You have to show yourself to a room full of semi-influential people who might look you in the eye and say no,” Rosenberg said. “When you’re pouring your heart and soul into a startup, it’s your baby. And no one wants to hear they have an ugly baby.”

Dawdling on Due Diligence

Rosenberg has an interesting perspective on the issue, as he’s been on both sides of the table. A serial entrepreneur himself, Rosenberg personally pitched to a room of TCA investors over a decade ago for his then-startup AIRSIS Inc. He scored funding from TCA investors back then, and has since been defending the honor of TCA to his entrepreneur brethren. But he also sees why founders were frustrated with TCA. Checks were small, communication was poor, and parts of the process did not serve entrepreneurs.

So he volunteered to overhaul one part of the process that entrepreneurs consistently took issue with: the time it took to get from successful pitch to check-in-hand.

As the vice president of due diligence for TCA, Rosenberg vowed to cut the process from several months to 30 days.

The organization has made tons of progress since Rosenberg’s initiatives took place, including leading Echo’s seed round ($2 million) in under 45 days, and leading Echo’s $7.5 million round in under 60.

“That was unheard of before,” Rosenberg said.

Rosenberg sat down with the San Diego Business Journal to discuss the changes at TCA, what inspired them, and what to expect from the group moving forward. Here are some excerpts:

You wrote in a recent blog post that entrepreneurs are sometimes off base with their perceptions of angel groups like TCA. What’s the most off-base perception?

That angel groups don’t write checks. I have a visceral response to that because it’s just not true.

We do a pretty good job of recordkeeping, and Tech Coast Angels wrote $15 million in checks themselves (for all of Southern California), not including friends of TCA and rounds TCA led that other money came into.

It’s important to me to get the word out that TCA is writing checks — especially to the group of entrepreneurs at EvoNexus, because the Evo group includes some of the best startups in the community.

How does that perception spread?

The reality is — whether you’re a venture capital firm or an angel group — you’re only investing in one out of 20 companies, or roughly 5 percent.

But what I think was happening was the entrepreneur was being treated badly in the process, which was negatively influencing the way they thought about angel groups. So I set out to completely change that.

How were they being treated badly?

It felt a little bit like Shark Tank. People would listen to an entrepreneur’s pitch and try to dream up the best questions to trip up the entrepreneur. And this would often happen by people who weren’t even considering investing. If you’re not intending to invest in a company, you shouldn’t be wasting time in the Q&A session.

In what ways has TCA become more considerate to entrepreneurs?

When an entrepreneur would leave the room, we used to ask the group, “Who’s interested in passing this company through the due diligence process?” A bunch of people would raise their hand, and we would start due diligence for the company.

We made one subtle change. Instead of asking who was interested in passing the company on to the next phase, we ask a more pointed question, “Who is going to write a check to invest in this company, subject to the successful completion of due diligence?”

So you don’t want to lead an entrepreneur on, wasting their time if there are no serious investors considering the deal?

Right. When I was running my business, I used to tell difficult potential customers, “A ‘no’ is good, a ‘yes’ is better, but a ‘maybe’ is deadly.”

TCA was in the business of a lot of maybes, and that’s bad for our reputation. Entrepreneurs would be progressing through the due diligence process without ever really knowing where they stood.

Putting my entrepreneur hat on, I get what it’s like to worry about missing payroll. That’s time burning on the clock.

What else are you doing to improve the experience for entrepreneurs?

We incentivize our members to invest by reducing their membership fees if they’ve actively invested during the year.

In your view, is it an angel group’s primary purpose to write checks? Or is it more to give entrepreneurs advice and guidance?

As angel investors, I think we overvalue advice. We think that the people presenting to us are happy to hear our thoughts and advice. And of a lot of them are. But there are lots of services in San Diego for entrepreneurs to get training, support and advice. The reality is these people are in front of us because they need money.

It’s true that angel investors, as a class, bring more than money. But with that said, if we can’t bring the money… we’re not quite as valuable to the entrepreneur.

TCA’s new executive director, Ashok Kamal, said they added his position to help TCA compete against crowdfunding and other sources of early-stage capital. Is this competition also the reason TCA is making the organization more entrepreneur-friendly?

There is more competition. There wasn’t AngelList before, and there wasn’t crowdfunding. I know at the board level, we talk actively about the competitive threat of some of these other platforms. And the Angel Capital Association, which is sort of a trade organization for angel investors, actively talks about how to compete and how to be relevant. That could be driving a lot of this.

But I also think there’s a maturing of the startup scene in general, and that drives us to take a more professional approach.