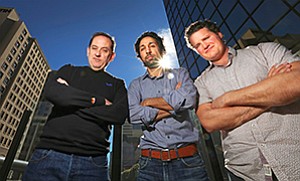 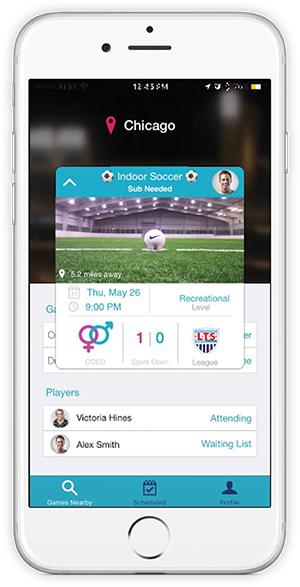 Showing up for practice and games might be a matter of life or death in school, but players of “rec leagues” are often busy adults looking for a fun way to spend a weekend.

“These are social sports,” said Subme co-founder Eric Geller, who plays dodgeball, flag football, and softball on San Diego teams. “People have other obligations and other priorities. Sometimes they don’t show up for games.”

For those committed to the team, however, no-shows can be upsetting. If the captain can’t find a substitute in time, the team will often have to forfeit the game. Geller, 35, said it’s common to see team captains furiously texting friends to sub in for no-shows minutes before a game. Sometimes they’ll send blasts of desperation on social media: “I need a sub — and fast!”

This spurred Geller’s co-founder Aaron Kahn to found Subme, an app that connects captains with local people interested in subbing in for games.

The app has launched in 50 cities since its debut last April, and has accumulated 5,000 users in San Diego alone (its largest market). The app attracts a niche demographic of sports enthusiasts, increasing the likelihood that captains can find willing subs on short notice. Users don’t immediately translate to revenue for startups, but Geller said the company has several plans for monetization.

One idea is charging users $5 or less when they sub in for games.

“If you sign up for a rec league, you have to pay $90 to $120 for the season,” Geller said. “Leagues are in the business of new registrations. It’s how they make their money.”

But some people don’t want such a long-term commitment. A cheap $5 game can be an easier sell to interested players.

Subme also wants to help leagues grow. Geller said leagues are most interested in creating full teams, so the app allows captains to connect with interested players and helps facilitate seasonal commitments. Currently, that money goes straight to the leagues, but Geller said he can see Subme charging 10 percent of the transaction price per sign up.

Subme also collects data on its users, and delivers analytics information to leagues.

Subme isn’t alone in the rec league space. A more developed tech company called LeagueApps plays in this same arena, helping leagues with scheduling and transactions. The New York City-based company has raised nearly $5 million in venture capital. But the company hasn’t built out features for subs, or a network of willing players in popular regions, Geller said.

Could there be an acquisition in Subme’s future? Geller said nothing’s concrete, but they’re considering all their options.

For now, the company is focused on growing its user base. Geller said San Diego State University used Subme for their rec sports intramurals program starting last semester. He expects University of California, San Diego and University of San Diego to do the same starting this fall. 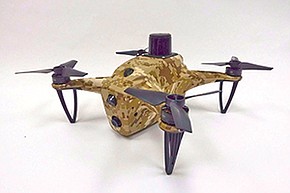 The funding will be used to further the company’s technology — an AI-enabled drone that finds people and threats inside buildings without a remote pilot.

The company was co-founded by Brandon Tseng, a retired naval officer, based on his experiences serving in combat in Afghanistan.

“Sometimes, tragic things happen when good information is lacking on the battlefield,” Tseng said. “When deployed, Shield AI drones will be the first example of service members using artificial intelligence on the battlefield to gather real-time information that saves lives and will provide immediate protection to U.S. ground forces and innocent civilians caught in conflict.”

“When Brandon shared his stories of loss and inspiring vision of artificially intelligent machines that would save lives, Andrew and I left our jobs to join Brandon and start Shield,” Ryan Tseng said.

As part of the new financing deal, Peter Levine, general partner at Andreessen Horowitz, has been appointed to Shield’s board of directors.

Investors Homebrew, Bloomberg Beta, and Founder Collective all joined in the round.

SOCi Inc., a company that makes a software platform for social media marketers, brought in $8.5 million in a Series A financing round.

The company plans to use the money to expand its sales and marketing efforts and further develop its technology. 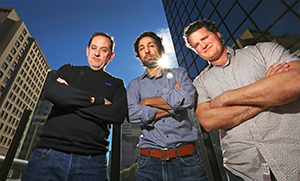 Approved, a San Diego-based fintech that aims to digitize the mortgage process, has closed a $1 million round of financing and formally launched its platform.

Previously the startup had raised $250,000 in angel funds.

“We believe getting the loan is the most tedious part of buying a home,” Taylor said. He said the startup hopes to streamline the process for lenders and borrowers alike like Redfin did for prospective real estate buyers searching for properties.

The funding, a pre-seed round, was led by Social Capital and Precursor Ventures. Bluesky Equities, Graph Ventures and a number of angel investors joined.

After leaving Redfin, Taylor spent some time as an entrepreneur-in-residence at Social Capital, the Palo Alto-based venture capital firm which was then known as Social+Capital Partnership.

The money will be used to take the platform, which has been in pilot testing for about six months, into full production.

Testers told Approved the platform had reduced the time it took them to complete loans by about 50 percent, Taylor said. That’s because it made document collection simpler through features such as the ability for borrowers to take a photo with a phone of the needed paperwork and sent it securely to a loan officer.

Taylor said Approved’s platform is for companies of all sizes and digital know-how.

Approved is based in downtown San Diego at EvoNexus, a technology incubator for startups. The company has five employees.