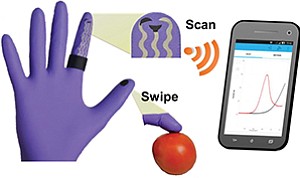 UC San Diego scientists created a lab on a glove. A wearer swipes the suspected surface (here a tomato) with a thumb, rubs the thumb against the index finger (which contains electrodes), and reads the test result on a smartphone. Illustration courtesy of American Chemical Society

San Diego — The University of California, San Diego says it has developed a “lab on a glove” to detect sarin, VX and other deadly nerve agents. In addition to defense uses, the invention could be used in agriculture to detect a related family of organophosphate pesticides, according to the American Chemical Society. Joseph Wang, a professor of nanoengineering at UC San Diego’s Jacobs School of Engineering, led a research group that published its findings recently in the journal ACS Sensors.

To use the lab on a glove, a person would touch a suspicious object with the glove’s thumb and then rub the thumb against electrodes printed in a special ink on the glove’s index finger. That would activate biosensors on the glove. Resulting data would be transmitted wirelessly to a smartphone, which would show the test result.

The rules for quantum mechanics are different, difficult and downright weird. But the field has a lot of potential.

Nayfeh is on staff at the Space and Naval Warfare (SPAWAR) Systems Center Pacific.

In his new role, Ziesing will lead the company’s aircraft launch and recovery equipment programs for U.S. Navy aircraft carriers. These are the Electromagnetic Aircraft Launch System (aka EMALS) and Advanced Arresting Gear (AAG) programs.

Ziesing was previously vice president of national security programs and vice president of nuclear equipment manufacturing at BWX Technologies. He also worked at Westinghouse. Ziesing has overseen government nuclear reactors as a Navy officer and a civil servant.

General Atomics, which is privately held, said Ziesing will work on sustainment programs for the aircraft carrier equipment, export opportunities for EMALS and AAG, and unspecified strategic growth initiatives.

Scott Forney is president of GA-EMS.