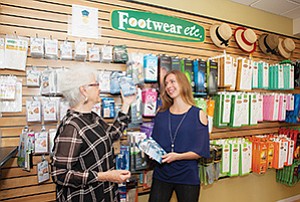 San Diego — The orthotics business isn’t one that typically inspires the dreams and aspirations of children. Laina Gossman was no exception.

“It’s funny how you stumble into things in life,” said the San Diego native who confesses to owning only three pairs of shoes growing up.

Now, the entrepreneur and founder of Soul Insole is bringing thousands of people relief from plantar fasciitis and forefoot and heel pain through her patent-pending biomechanical shoe insole, and making orthotics sexy again.

“The main difference between this insole and everything else out there is it only goes in the mid-section of the shoe,” said Gossman, who launched Soul Insole on Kickstarter in April 2016, raising three times more than the $7,000 she requested on the funding platform. “It doesn’t go under the forefoot; it doesn’t go under the heel. It drops off before those areas while suspending the bones and redistributing the pressure more evenly across the rest of the foot.”

That means the insole, which is made of a clear polyurethane gel, can fit into shoes other than bulky tennis shoes. It even works with high heels and flip flops, for the San Diego crowd.

San Diegans aren’t the only ones interested in insoles. Market research firm IndustryARC estimates the orthotic insole market will hit $3.5 billion by 2020.

“I’ve been hand-making insoles for the past 11 years,” Gossman said. “I made full-length insoles, so I created different geometries under the insole to help change the way people walk and take pressure off certain areas. The clients were loving these insoles, but a lot of them, women especially, would come to me and say ‘Look, you know I love your insoles but I can’t wear tennis shoes all the time. Is there something you can make me to fit into my shoes when I go on a date or for business shoes?’”

After several years spent searching for a manufacturer able to produce exactly what Gossman had in mind, she found a candidate in China. The molding of the material was a challenge, and had to be done in such a way that the bottom of the insole was sticky enough to stay put in a shoe, but still be removable for use in other shoes, while also being washable and clear in color so it could be used in high heels or other more stylish shoes.

While she has been the driving factor and mastermind behind the insoles for the five years she has now spent developing the product, she didn’t go it alone. Gossman is part of two entrepreneurial groups in San Diego — small business mentorship nonprofit SCORE, and inventors group 3rd Space.

“There are so many places to collaborate with other entrepreneurs in San Diego. There’s so much support out there if you want to find it,” she said.

Getting Her Foot in the Door

Gossman stumbled into the shoe business as a freshman at San Diego State University looking for a job to bring in some spending cash. She sold shoes at a boutique in Carmel Valley, and noticed the owner also handmade individual insoles for a steady stream of clients in the back. When things got hectic on this side of the shop, she offered to help, and became the owner’s apprentice. Gossman wound up enjoying the gig so much that she switched her major to kinesiology with a focus on biomechanics, and has had a plan to create a better, more usable insole in the back of her mind ever since. She graduated in 2009.

“Laina definitely has an entrepreneurial spirit,” said Arnel Aguinaldo, a professor of kinetics at SDSU during Gossman’s tenure and head of the school’s biomechanics lab, where she was able to conduct some early stage kinematics and kinetics research in the footwear area. Aguinaldo is now a professor at Point Loma Nazarene University.

“She (Gossman) had at least some rumblings or some ideas regarding the company that she has now and ways to improve someone’s feet through orthotics or a combination of orthotics and different types of shoes, back in college,” Aguinaldo said. “It’s good to see her flourish in this industry because I know this is an idea that she had for a long time, and she followed up on it.”

Gossman also works as the San Diego sales representative for Burten Distribution, the company that initially agreed to sell Soul Insole to shoe stores after seeing how well it did at one footwear convention.

Soul Insole currently only has the one insole product that launched in April 2016, but Gossman said her mind is still full of new ideas on how to further improve podiatry. For now, the insole can be found online, or in about 70 stores around the country, from footwear outlets such as Footwear etc. to Foot Solutions and Birkenstocks, to shoe repair stores, chiropractic offices, podiatry offices and physical therapy offices.