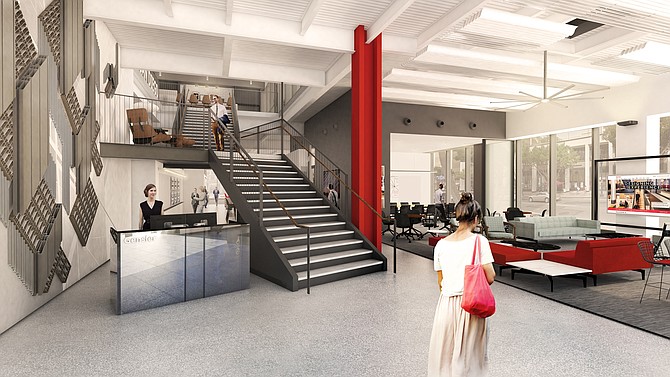 A Gensler statement said the firm, effective April 10, will occupy approximately 21,000 square feet on the ground and second floors of the office tower at 225 Broadway, which is owned by Irvine Co. Officials did not disclose lease terms or the cost of an extensive renovation of the space that is nearing completion.

The new Gensler ground-floor lobby will open directly onto the eastern plaza at 225 Broadway Circle. The lobby will host events and will feature a digital interface displaying Gensler-designed lighting, case goods, flooring and accessories.

Officials said a section of the second floor was removed to support collaboration and to allow for the addition of a flowing stairway connecting the two floors. The mid landing of the stair is a cantilevered extension of the mezzanine and will house Gensler’s material resource library.

“Our goal was to accelerate connectivity, creativity and productivity,” said Kevin Heinly, principal and managing director at Gensler. “By bringing our design studio down to the street level of this iconic location in downtown, we’ve done just that.”

The new office will also have an outdoor roof terrace overlooking the recently renovated Horton Plaza Park, along with other meeting spaces of various sizes and configurations.

A Gensler spokeswoman said the company’s name will appear in two exterior places near the ground floor of the new office, but it will not be on the top of the Broadway tower, where NBC had its primary signage for several years.