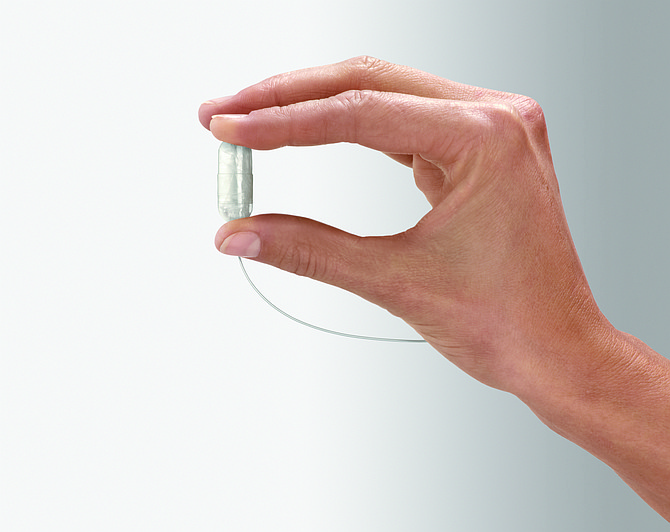 San Diego’s Obalon Therapeutics Inc. is on a roll. After announcing a $75 million IPO on Friday, the company said this morning that it has received FDA approval of its lead product: the Obalon Balloon System.

Obalon’s weight-loss product is a gastric balloon folded inside a dissolvable capsule (the size of a vitamin pill). The patient swallows the capsule, which is attached to a thin tube called a micro catheter. When the pill reaches the stomach, gas is pumped into the balloon through the tube. Once inflated, the tube is detached and drawn out of the patient’s mouth. The procedure can be done in about five minutes, without anesthesia or sedation.

Obalon’s weight-loss balloon differs from gastric bypass in many ways – most notably its target market.

The candidates for gastric bypass surgery typically have a body mass index of over 40, which is considered “morbidly obese.” Andy Rasdal, founder and chief executive officer of Obalon, said in an interview last year that the company wanted to develop an option for the much larger percentage of the population – people who are clinically obese, but not morbidly so.

“Today, the options are really diet, exercise and surgery,” Rasdal said. “Surgery is only relevant to the morbidly obese people. Our intention was to create a device that has a safety and risk profile that is very benign, so that newly obese people who have clearly failed diet and exercise have another option.”

Starting in 2012 Obalon had sold an earlier version of the weight-loss balloon system in the European Union, Mexico and the Middle East. The company said in the filing that in 2015 it stopped selling outside of the Middle East and focused on earning permission to sell in the U.S.

In the clinical trial that earned the balloon FDA approval, 387 patients in the in the U.S. (across fifteen clinical trial sites) were randomized in a double-blind, sham-controlled study.

The patients in the clinical trial received either three Obalon balloons or three sham placebo-like devices that looked similar to the balloons, but were filled with sugar. The patients in both groups were given minimal diet counseling of 25 minutes every three weeks. About 65 percent of patients who received the Obalon Balloon System experienced “clinically meaningful weight loss” of at least 5 percent of their total body weight, which is twice as many people than in the sham-control group.

The medical device company’s planned IPO would be the second this year by a San Diego-based company, and the first life science firm to go public in 16 months.