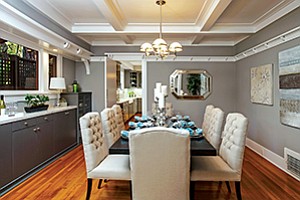 The dining room of a home in Hillcrest at 3543 Third Ave. that included restoration of the original floors and ceilings. Photos courtesy of Berkshire Hathaway HomeServices

San Diego — It was quite an unexpected surprise for me while researching this week’s column on Hillcrest to find a home built in 1913 by one of San Diego’s earliest and most noteworthy families.

The recently restored, charming Craftsman-style home is at 3543 Third Ave. in Hillcrest and is priced at $2.195 million.

Sal DeMaria, a Realtor with Berkshire Hathaway HomeServices, has the listing on the five-bedroom, five-bath, 4,041-square-foot home.

“The home was built by Edgar Luce Sr., the son of Moses A. Luce, an attorney who came to San Diego in 1873,” DeMaria said. “Moses Luce was a decorated Civil War veteran who helped found the Luce Forward Hamilton & Scripps law firm.”

Moses Luce also helped draft the San Diego city charter and was a judge of the County Court of San Diego. Luce Forward was one of the largest law firms in the U.S. in terms of revenue when it merged with McKenna Long & Aldridge LLP in 2012, according to a June 2011 issue of the magazine, The American Lawyer.

Edgar Luce Sr. lived in the home he built on Third Avenue for 30 years. During that time he became a senior partner at Luce Forward, a judge for the Superior Court of San Diego County and a state Senator from 1914 to 1918.

DeMaria said the house has been completely renovated and maintains all the original charm and culture that once was, but “bringing it up to the 21st century as far as the kitchen, plumbing, electricity, heating and baths.”

The company that did the renovation was San Diego-based Alliance

Development Services. Greg LaMarca, president, bought the home out of an estate to modernize and resell it.

“The historical significance of the house is pretty neat,” LaMarca said. “Only three people have owned it in 100 years. Luce lived in it the longest period of time.”

Designated as a Mills Act house, which grants a reduction of property taxes in exchange for the continued preservation of the property, LaMarca’s company did an extensive remodel on the interior of the house.

“In order to stay in the Mills Act, you can’t do anything to the outside of it,” LaMarca said. “And we didn’t do anything to it; we left some old shingles, tore off some newer patio enclosures that had vinyl exteriors that didn’t fit the house at all and took the outside house back to its original, maintaining the exterior integrity.”

Inside, the team included LaMarca’s wife’s company, Sophia LaMarca Designs for the interior design and Joe Barbano as the project’s architect.

“We took the house down to the studs in most areas and reconfigured the spaces inside to be more modern,” LaMarca said. “It’s got more of a great room kind of kitchen feel to it now.”

He said the original kitchen was a small, galley-style room separated from the rest of the house.

“It’s really a magnificent property, it’s something you have to see to appreciate,” LaMarca said. “We pulled up all the old carpet over the old hardwood floors and the wood was still good, so we refinished them. And where we brought new stuff in, we blended that wood with the existing floors, so it’s all high-end.”

LaMarca said the purchase of the property included two lots. The company bought the house that sat on one lot and the lot next door came with it.

“It’s actually a Prairie-style Craftsman house,” LaMarca said. “The entrance is on the side with a porch and a large yard that at one time probably included a lot more acreage, so it looked out over their acreage.”

Alliance Development Services has done several projects in San Diego and has several in development. Next door to the renovated Craftsman, Alliance is expecting to start construction in late fall 2016 on Parc Pointe, a townhome project of five, two and three bedroom units.

The other future projects include 10 townhomes in Hillcrest called Uptown on 7th, just down the road in Bankers Hill is High Pointe, a three-unit complex and Garrison Landing, a four-unit complex in Point Loma. The company is just finishing up Village 201 By the Sea’s 14 units in Carlsbad and has plans for an additional 15 in Point Loma.