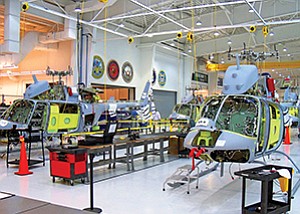 The move has doubtless been part of the closed-door conversations at Northrop Grumman’s Rancho Bernardo offices, where the aircraft builder bases its Global Hawk program.

The U.S. Air Force uses a related sensor in its U-2 aircraft, a platform that might be near the end of its life. That legacy sensor is the celebrated SYERS (Senior Year Electro-optical Reconnaissance System), also built by UTC Aerospace Systems.

United Technologies (NYSE: UTX) said it has a contract to build an even more powerful sensor, called the MS-177A, which will fly on the Global Hawk by 2019. It’s too early to say how many of the sensors it will build, the company said in a statement.

I’m sure United Technologies, Northrop Grumman and military brass are getting some great pictures from all of those sensors. I also doubt those images will be declassified in my lifetime.

A Whirlybird for ISR: Northrop Grumman said in late September that it was set to build 10 more Fire Scout unmanned aircraft for its U.S. Navy client. The Pentagon announced a $108.1 million contract for the 10 aircraft on Sept. 9.

There are actually two versions of the Fire Scout. The Navy is buying the larger version called MQ-8C — a Bell model 407 helicopter that is heavily modified for autonomous flight. Its cockpit windows are blanked out and it carries a sensor turret under its nose.

With the 10 new aircraft, the Navy will have a total of 29 MQ-8C Fire Scouts. Northrop reports that particular model of the Fire Scout has flown 353 sorties, accumulating 730 hours in the air. (The manned version of the Bell 407 has a much longer record, having flown 4.4 million hours.)

The Fire Scout is part of the surface warfare mission package the Navy is deploying with its Littoral Combat Ships.

One third of the work on the new contract will be conducted in the Rancho Bernardo office — home to all of Northrop’s unmanned aircraft programs. The actual helicopters go together in Ozark, Ala. and Moss Point, Miss. The Naval Air Systems Command of Patuxent River, Md. awarded the contract, and the deal was not competitively procured.

Northrop Grumman says the Fire Scout program is preparing for a point called Milestone C, where it exits the R&D phase and goes into low-rate initial production.

Drones on Ice: CBS News’ “60 Minutes” broadcast recently showed U.S. scientists and the U.S. Navy operating in the Arctic Ocean with what appears to be a San Diego product: a remotely operated robot from Teledyne SeaBotix, decorated in the Scripps Ranch company’s trademark bright green. The segment showed scientists testing two types of drones in a hole cut into an ice sheet. The newscast reported that swimming drones might go to work mapping the underside of the sea ice with sonar to help navigation. After all, there is no GPS under the ice. Like their airborne counterparts, underwater drones might also keep a lookout for adversaries under the water — though it’s a little unclear if the SeaBotix drone will go to work on that.

The place is heating up, both literally and figuratively. As sea ice melts, the Arctic Ocean is expected to open to ship traffic. Shipping companies will likely take advantage of a time-saving polar route between European and Asian ports. There could easily be a scramble for oil and other resources in the Arctic Ocean. What’s more, Russia is militarizing the region, according to one retired military leader interviewed by CBS.

SeaBotix’s remotely operated underwater vehicle is about the size of a microwave oven. It doesn’t swim freely. Rather, it operates at the end of a very long tether (the CBS News footage showed a thick roll of green umbilical cord for the drone).

Teledyne (NYSE: TDY) bought SeaBotix and its parent company in 2014. The business unit’s underwater robots perform a variety of inspection tasks, in all temperatures of water. In August, SeaBotix moved to bigger quarters in Scripps Ranch. The business was formerly in Liberty Station, where it retains its training facility. When I first visited SeaBotix in 2007, the company was in an overcrowded business incubator space on the San Diego City College campus. Judging by its continued growth, this company has found a nice niche.