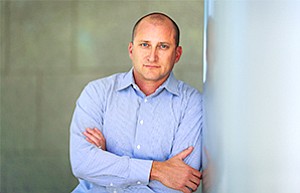 San Diego — CureMetrix Inc. is not your typical software startup.

Walking into the company’s headquarters, you can’t help but notice the lack of Ping-Pong tables and snack bars. No standing desks or sweeping downtown views, either. Walls are sparse. Keyboards are tapping. One employee sips tea as a complete hush envelops the space.

Not your typical tech startup, indeed.

Kevin Harris, co-founder and CEO of CureMetrix, said the vibe is intentional.

“We’re not 22-year-old kids, and we’re not three guys and a dog working out of a garage,” Harris said, laughing.

CureMetrix isn’t working on fluff tech, either, like the startups that use code to deliver pizza more expeditiously or build apps that convert selfies into abstract paintings.

“We wanted to build a company that would have an impact on the world,” Harris said. “I’ve done a lot of interesting stuff in my life, but nothing I would want on my headstone, so to speak.”

CureMetrix’s product would certainly be headstone worthy, if everything goes according to plan.

The company’s software is being built to analyze medical images, including X-rays from mammograms (which are conducted roughly 40 million times per year in the United States, according to the FDA).

Here’s how CureMetrix’s software would work: The doctor snaps the X-ray and uploads it to a server. The software scans the image for millions of anomalies, isolating the most important and potentially dangerous ones. On the doctor’s computer, the software places an overlay on the X-ray image, highlighting the concerning anomalies and rating them by severity.

If CureMetrix succeeds, the company could identify breast cancer early, and with more certainty than industry standards today. This could help reduce false positives (which cost the health care system billions of dollars per year), and reduce the number of unnecessary surgeries due to biopsies.

The technology is called computer-aided detection (CAD), and the basic idea for the tech has been around for a couple decades. Just for breast cancer applications, the global CAD market is expected to be worth $1 billion by 2020, according to market research.

CureMetrix has plenty of competitors in the space.

The local startup’s Goliath is a company called Hologic, whose CAD software is the industry standard. The $11 billion giant of the diagnostics space has many irons in the fire, however, with a heavy focus on hardware rather than software.

“(CAD) is a sliver of their world,” Harris said.

When asked how he would compete with Hologic, Harris was reluctant to outline CureMetrix’s competitive edge.

“I’ll just say our approach is fundamentally technologically different, and we’ve filed for patents on it,” Harris said.

“There are a lot of companies out there that are shortcutting the deep-learning process,” Harris said. “My guys are computational physicists and plasma astrophysicists. They didn’t come at this from an image analysis perspective. We’ve taken a very different approach to the problem.”

Technology Can Take On Others

CureMetrix, which is housed in the EvoNexus incubator in UTC, has raised $3.5 million in seed funding since its 2014 inception.

The company’s first investor was Analytics Ventures, the local VC fund that previously operated as an angel syndicate.

“The addressable market (for CureMetrix) is massive,” said Navid Alipour, managing partner at Analytics Ventures. “Breast cancer is just the first target. The technology can be applied to lung, brain, prostate, heart, etc. as well as verticals outside of health care. The artificial intelligence can be applied to any data sets or images to detect anomalies.”

Alipour said CureMetrix is in the middle of raising a $10 million Series A round.

Harris said CureMetrix would like to capture anywhere from 10 percent to 20 percent of that $1 billion CAD market. He estimated that the company could pull in $30 million to $50 million in annual revenue over the next two to three years.

But that’s dependent on CureMetrix landing CE Mark approval in Europe, and FDA approval in the U.S., which would allow the company to commercialize. The CE Mark alone is at least a year down the road, Harris said, and the FDA process will start even later.

In the meantime, the company is running trials in the U.S. with research partners, including UC San Diego Health and Hoag Hospital in Orange County, to make sure the software works in the clinical environment.

“We’re racing as fast as we can to bring this product to market in a way that can actually help patients and the health care system,” Harris said.

Company description: A startup fighting cancer with artificial intelligence. The company has developed an algorithm for image analysis, which is currently being tested to identify lung cancer in X-rays and for breast cancer detection in mammograms.