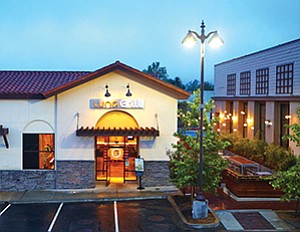 Luna Grill has recently opened several new restaurants outside of its home base of San Diego, including this location in La Cañada Flintridge, near Pasadena. Photo courtesy of Luna Grill Restaurants LLC

San Diego — Healthy — or at least relatively healthy — continues to reign at U.S. restaurants, where diners increasingly look to minimize the junk food intake while keeping the tab around $12 or less.

San Diego-headquartered Luna Grill Restaurants LLC is among the players capitalizing on the rising popularity of the Mediterranean-style segment of the larger category known as fast-casual eateries — no drive-thru and no full table service, but offering midpriced fare that emphasizes fresh vegetables, grilled meats and seafood over double-stacked burgers.

Started in 2004, Luna Grill now runs 29 restaurants serving items including kabobs, salads and wraps, with an additional 18 locations in its development pipeline for 2017. Several of those new eateries will open in the Dallas- Fort Worth market, which it entered two years ago and where it currently runs four restaurants, with one more scheduled to open soon in Richardson, Texas.

For the rest of its upcoming growth, CEO Sean Pourteymour said the company will be strategically filling out its existing strongholds of San Diego, Orange, Los Angeles and Riverside counties. It is also looking to open its first venues in Ventura and Santa Barbara counties, as it pushes northward within California.

And it plans to maintain ownership of all those eateries, as it cautiously evaluates expansion opportunities.

“All of our current restaurants are company-owned and we don’t currently have plans on switching to a franchise model,” said Pourteymour, who founded Luna Grill with wife Maria, the company’s chief cuisine officer. “All our new locations will also be company-owned.”

Luna Grill now employs about 700 companywide, including 40 housed in the new headquarters, which is nearly twice the size of its former operations office. Luna Grill has also more than doubled its revenue from just two years ago, posting sales of nearly $27 million in 2015.

The Pourteymours’ menu planning — with genetically modified or hormone-filled meats and vegetables among their long-banned items — started as an extension of their quest to raise their own children to eat healthy. The menu is actually a fusion of Mediterranean and Middle East influences, combining elements of Sean’s Iranian heritage with Maria’s experience growing up in her family’s Greek restaurant.

Sean Pourteymour said the couple has always sensed that people want to eat in a more healthy way — reflected nationally in dietary and grocery-shopping trends — even if they are pressed for time or sticking to a budget. But even as those trends have taken hold on a mass scale, his company’s growth has always been gradual and strategic.

“We have seen too many operators expand too quickly without the back-end infrastructure and knowledge in place to guide growth,” he said.

Industry observers note that Luna Grill has generally executed well in what has become a popular restaurant segment in recent years, with a growing slate of national and regional competitors.

By comparison, the sales growth rate for the entire U.S. restaurant industry in 2015 was 4.8 percent, as revenue surpassed $490 billion.

“The segment stands out for its fresh and healthful positioning,” Hallow said. “The Mediterranean diet is perceived as healthful, so consumers feel good about eating at Mediterranean restaurants.” She added Mediterranean-style food is generally more “flavorful and exciting” than standard healthy fare — i.e. salads — usually found at other types of chains.

As it expands beyond Southern California, the Technomic consultant said Luna Grill will be up against numerous other growing fast-casual chains operating on its Mediterranean-style turf, though currently not going head-to-head with the San Diego company in most of its markets.

Those players include Cava Mezze Grill, with a growing presence in markets such as Washington, D.C., New York City and Los Angeles; Little Greek Fresh Grill, which operates in the Southern U.S. and also has a Dallas-area presence; and Zoes Kitchen, with restaurants in about 20 states including Texas.

Hallow said Luna Grill may find it necessary to tweak its menu in some markets to suit local tastes, and may need to offer more customization to its offerings, tying into the “build your own” meal element seen at some other chains.

“What Luna Grill will have to contend with is local competitors who have a strong hold on the Mediterranean market — such as Cava Mezze Grill in D.C. and New York — with consumers increasingly showing loyalty to local brands,” Hallow said. “It’ll have to show consumers why they should visit them over their local Mediterranean restaurant.”

For now, Luna Grill is building on its Southern California presence, with its loyal and growing clientele, while wading carefully into the Texas market.

Sean Pourteymour said he is also operating based on two key lessons he carried with him from his earliest days running the company.

“Invest in your people and stay relevant,” the CEO said.