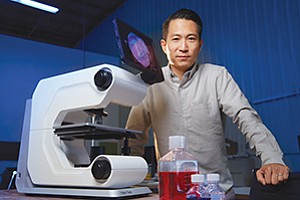 San Diego — Local startup Echo Laboratories Inc. has landed a $1.8 million round led by Tech Coast Angels, the biggest single contribution the angel group has made to date.

The company plans to use the new funds to build its sales team and scale manufacturing to meet market demand.

“This guy is always organized, always gracious, he knows his market inside and out, he’s created a great team around him and a game-changing technology,” Kamal said. “What’s not to like?”

Echo designed (and is manufacturing) a piece of scientific equipment called Revolve, a hybrid microscope that combines two of the most commonly used microscopes (the upright and the inverted) into one instrument. Priced competitively to both existing instruments, the Revolve allows scientists a more budget-friendly option by buying one hybrid microscope instead of two.

Echo also incorporated an iPad into the microscope, and a high-end digital camera. “Echo Labs brings advanced usability and 21st century technology to microscopy,” said Annie Mak, a member at TCA. “As a scientist who has 20 years of experience and goes through all the learning curves of cutting-edge technologies, I particularly appreciate Echo’s focus on being user-friendly and intuitive so that scientists can focus on the biology under the lenses rather than the technicalities of operating the microscope.”

Mak said the sentiment is echoed by professors, who found their students are more willing to study experiments under the Revolve microscope.

“(They’re) getting more inspiration for their research,” Mak said.“

The impact is evident to angel investors of TCA who enthusiastically pitched in.”