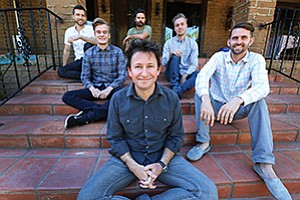 San Diego — A stealthy ex-Googler who moved his startup to San Diego earlier this year has finally stepped out of the shadows with a new augmented reality app and a $2 million seed round.

The company, called GoMeta Inc., has been stirring up excitement for the past few months with hype-inducing stunts around Southern California. The latest was a Pokémon Go-like scavenger hunt, in which users of the iPhone app could unlock virtual clues at real-world locations, which led users to real stashes of hidden money (to the tune of $10,000).

To those new to augmented reality (or “AR,” as the experts call it), it’s basically technology that superimposes information onto the world that we see. Although hardware like Google Glass made “Star Trek” fans dreamy, smartphones are the most common mediums for AR today. Through the smartphone’s built-in camera, users can view an altered version of the real world. In Pokémon Go, that means seeing cartoonish creatures in your living room, your bus stop, and your neighborhood bar.

In the Metaverse, users can do much more.

GoMeta’s app is built to allow anyone to interact with its AR universe. Essentially, users can create games, scavenger hunts, and other experiences within the app. And you don’t have to know code to interact and build in the Metaverse. Using a builder within the app, users can create geo-specific “experiences” and drop them onto a virtual map of the real world. Just like with Pokémon Go, the user can walk up to experiences in real life, see a virtual tag on their smartphone, and tap on the tags to interact.

The startup was founded by Dmitry Shapiro, who until recently worked on Google’s social media projects. Shapiro has an impressive background as a tech executive, including a gig at Myspace, where he served as chief technology officer. He was also founder of Veoh, an early competitor of YouTube.

Shapiro has lived and worked locally since 1999, and said he believes San Diego is the next big technology hub. He convinced a team of seven employees to move from the Bay Area and other top technology cities down to San Diego. The team includes ex-employees of large technology firms like Google, LivingSocial, and Disney, Shapiro said.

Shapiro envisions the Metaverse as a home for multitudes of user-generated scavenger hunts, interactive stories, and even augmented reality worlds directing you to things like public bathrooms. He also sees a variety of commercial and educational applications.

“Augmented reality is a new medium, just like video or internet,” Shapiro said. “Video was once just for entertainment, but now video is used as a tool to sell cars or houses; it’s used for dating sites and commercials. The same thing will happen with augmented reality.”

Anyone else thinking of “Ready Player One?”

When asked how GoMeta would make money from the app, Shapiro said the commercial opportunities were widespread. He noted the success of Pokémon Go, which in its first month made $250 million from in-app payments. Shapiro said he found Pokémon Go’s “sponsored locations” model particularly intriguing, in which businesses pay to have Pokémon characters “spawn” near their business to drive up foot traffic. He also sees revenue potential in advertising and ecommerce.

Richard Tapalaga, a senior investment manager at Qualcomm Ventures, said it’s important to note that Pokémon Go’s success had a lot to do with “brand affinity.”

“There was latent demand for the Pokémon brand,” Tapalaga said. “Dozens of millions of people were affiliated with the brand, so there was a pull from the market side.”

“We definitely see augmented and virtual reality heating up right now,” Tapalaga said. That’s driven in part by the huge success of Pokémon Go, but also due to the advancing technology available in smartphones.

Still Need to Prove Themselves

Tapalaga said there are many “Pokémon Go clone companies,” and AR apps like Metaverse and Silicon Valley-based Aconite need to show serious traction with their user base before he would consider them promising investments. They also need to prove their technical chops.

At least a few investors are betting on GoMeta’s concept. On top of tech executives Eisner and Jones, the startup received cash from Greylock Partners and Moonshot Capital as part of its $2 million seed round. Shapiro noted that all the cash is angel money, not venture capital.

The startup is currently housed in the EvoNexus incubator in Downtown San Diego.