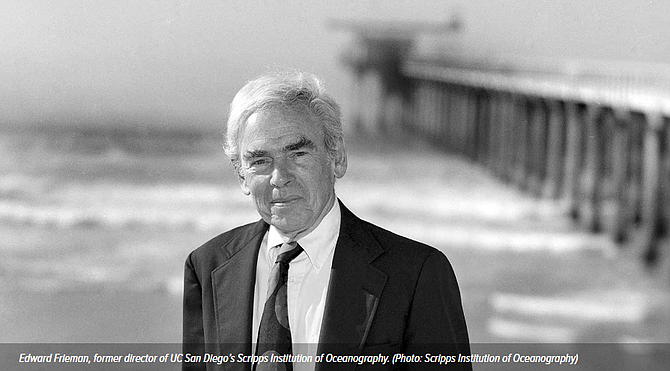 Joy Frieman, the wife of late Scripps Institution of Oceanography director Edward A. Frieman, has given $2.5 million to the University of California, San Diego in memory of her husband, who died in 2013.

Since his death at age 87, Joy Frieman “has been searching to find a suitable way to honor her husband,” according to a statement from UC San Diego.

“Ed was always interested in research and what research money could do, and he was one of the very early people to identify global warming,” she said.

Climate sustainability “is one of the most important issues of civilization today,” Joy Frieman said. “There’s much work to be done.”

By giving $500,000 toward both the postdoc and graduate student fellowships, she said she hopes it will inspire other donors to be “part of the climate sustainability solution.”

To complete funding for the fellowships, Scripps Institution of Oceanography needs to raise an additional $2 million.

Ed Frieman became the eighth director of Scripps Institution of Oceanography, UC San Diego vice chancellor of Marine Sciences, and dean of the graduate school of Marine Sciences in July 1986. He became director emeritus upon his retirement in 1996. He was a member of the National Academy of Sciences and served as assistant secretary of the U.S. Department of Energy from 1979-81.

He is credited with expanding Scripps’ research expertise in climate change and attracting prominent scientists to the institution such as Veerabhadran Ramanathan, a specialist in the study of cloud physics and leader in research into the influence of pollutant aerosols on climate, UCSD said in the statement.