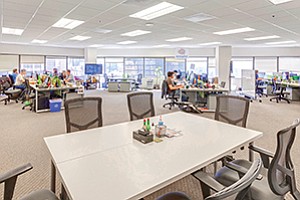 The Vine, housed in an office tower downtown, dedicates entire floors to stages of growth: incubator on the bottom, coworking in the middle and full office suites on top. Photo courtesy of The Irvine Co.

San Diego — Co-Merge, a popular coworking space formerly based in downtown San Diego, has merged locations with a former competitor just up the hill.

The fusion comes as San Diego’s coworking community continues to flourish and evolve, responding to demands from entrepeneurs, many of them millennials, for more flexible work spaces and appealing to commercial real estate companies eager to capitalize on the trend.

The partnership was the result of delayed expansion expansion plans for Co-Merge, which needed to vacate its downtown location, according to Co-Merge Managing Partner Michael Kenny. The company’s old location at 330 A St. was taken over by a former tenant of Co-Merge that grew so rapidly that it wanted to lease the entire coworking space, Kenny said.

Co-Merge, which was already looking for a new location, blended its workspace with Co-mmunity, a coworking space founded in Hillcrest last year.

Coworking has been one of the fastest-growing entrepreneurial trends of the last decade, and Co-mmunity is one of many recent spaces to launch in San Diego in the past few years.

These shared work environments are modeled like gym memberships: Members pay a monthly fee for a space to work or collaborate. The spaces are often used by “digital nomads” to connect with others on a regular basis — think freelance writers, graphic designers, programmers and app developers. But they’re also home to many of San Diego’s fledgling startups, which have small budgets and few employees.

Pay By the Hour

Co-Merge, founded in 2011, was a coworking pioneer in the San Diego region. The space was one of few that offered a pay-by-the-hour option, allowing walk-ins to rent a workspace for a short period of time rather than signing up for a monthly membership.

“That’s something I don’t believe any other coworking space does,” said Jerry Hall, a former tenant of Co-Merge and CEO of the startup Civic Archive. “It’s tremendous for what the market really needs. A lot of people come from the Bay area or Los Angeles, and they just want to come and work for a few hours.”

After partnering with Co-mmunity, Co-Merge stopped offering its hourly rate, according to Community Manager Noelle Maestas. The duo does offer a daily rate, however.

As part of the partnership, some (though not all) of Co-Merge’s tenants moved to Co-mmunity’s Hillcrest location. Co-mmunity also has shared access to Co-Merge’s contacts, customers, and new leads generated by the Co-Merge website, Maestas said. Maestas was careful to note that both Co-Merge and Co-mmunity remain independent businesses that simply share a space and some resources.

Although Co-Merge remains alive in name, not everything carried over to the new space. The company’s co-founder and general manager, Robert Conrad, well known in the community for building Co-Merge’s brand and network, left the company in June.

“Robert Conrad was the face of Co-Merge,” said Hall, who rented space and unofficially helped run Co-Merge’s front desk. “Robert ran the place, and most people interfaced through him. The people who signed up were there because of him.”

But Conrad earned a new marketing gig for the ride-sharing giant Uber Technologies. As Conrad was transitioning out of his integral role at Co-Merge, his co-founder Kenny was dealing with other changes.

Kenny was in the midst of considering several prospective properties for Co-Merge’s new location over the last two years, and came very close to renting a new downtown hub last year. But nothing materialized before Co-Merge needed to vacate its old space.

“Everything we were looking at went sideways,” Kenny said.

Hall added that Kenny seemed to be looking for an “iconic” space, and nothing quite matched his preferences and preferred price tag.

Kenny, who has a background in commercial real estate, said he decided partnering with Co-mmunity was currently the best option. He has plans to build a 20,000-30,000-square-foot headquarters for Co-Merge in the future, along with neighborhood satellite locations scattered across the county.

But Kenny said he’s in no rush to move out of Co-mmunity.

“I might have the space 30 days from now, or two years from now,” Kenny said. “We have a ton of options, and we just want to be sure to do the right thing.”

Asked if the business can continue to grow while he finds the right space, Kenny replied that he was not worried about losing tenants or brand recognition through the Co-mmunity partnership.

“The demand for coworking spaces is untapped here in San Diego,” he said.

But that may be changing as the concept rises in popularity. The coworking trend is becoming increasingly attractive to both entrepreneurs and commercial real estate companies in the region. Mega commercial real estate firm The Irvine Co. launched its San Diego space, Coworking at The Vine, in 2012, and many of Co-Merge’s past tenants have moved into The Vine’s downtown space.

The concept of The Vine makes a lot of sense for commercial real estate, said Michelle Gallegos, the community’s manager. The idea is to offer different levels of office space depending on a company’s stage of development. The Vine, housed in a downtown skyscraper, has entire floors dedicated to stages of growth: incubator on the bottom, full office suites on top and coworking in the middle.

“At any level of your business, we have a real estate offering,” Gallegos said. “We’re a 150-year-old real estate company, but we understand that the landscape for businesses is changing. We need to be a home for small and medium-sized businesses, and many of them just don’t need to rent a whole floor for 10 years anymore.”

Instead, Coworking at The Vine offers its tenants a desk for $350 a month — affordable for even the earliest-stage startup. But members don’t just get the desk; tenants also get shared collaborative spaces, meeting rooms, a beer tap and recreation space. The Vine also plays host to weekly (sometimes even daily) events geared toward startups, including Startup Grind (an event series partnered with Google that’s meant to educate and connect local startups) and 1 Million Cups (a national program with SharkTank-like feedback from investors and experienced entrepreneurs).

Not to mention, at The Vine, tenants are part of a large network of startups at every level of growth, along with a growing network of independent business professionals. Those connections can come in handy for startups, said Jeff Winkler, co-founder of Origin Code Academy. Winkler has worked in about 10 coworking spaces across the country (including Co-Merge), and is currently leasing a spot at The Vine.

“Other than having venture capitalists share the building with you, the next best thing is other startup founders,” Winkler said. “I’ve had other tenants help me with Google adwords, Facebook campaigns, and Meetups just by turning around and asking the desk behind me.”

Recognizing the shift in office space needs, Irvine Co., Co-Merge, and Co-mmunity are just a few of dozens of San Diego coworking spaces that have emerged in recent years.

Felena Hanson, founder of coworking space Hera Hub and leader of the San Diego Coworking Alliance, said she thinks shared workspaces are the way of the future, and not just for startups. The rise in their popularity is driven by millennial attitudes and globalization in big business, she says.

“Big companies like Qualcomm Inc. — who employ tens of thousands of employees — are finding that it’s difficult to be nimble with such a large workforce,” Hanson said. “And when you’re competing on an international scale, you need to get that ship moving quickly.”

Hanson said companies like Qualcomm have shifted toward contract-based workers as projects come and go.

Market research on the U.S. workforce revealed that 30 million people classify themselves as independent workers, either as full-time solo entrepreneurs or part-time entrepreneurs who pick up work for extra income. That number is projected to grow to nearly 40 million by 2019.

That could be why coworking continues to grow in popularity in San Diego.

“I think coworking and incubators are red hot right now, and we are aggressively expanding to meet an exploding market need,” said Darin Andersen, founder and chairman of CyberTECH, which operates four coworking spaces downtown.