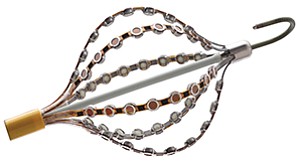 A “basket” catheter developed by San Diego’s Acutus Medical Inc. creates 3-D images of the inner chambers of the heart.

The latest financing round came from Deerfield Management Co., Xeraya Capital and an undisclosed strategic investor, along with existing investors

The sizeable funding is impressive for a five-year-old medical device firm, according to San Diego Venture Group President Mike Krenn.

“I haven’t seen a deal that size in quite a while,” Krenn said. “It’s even on the larger side for the medical device industry as a whole, so that’s great

The transaction brings the company’s total funding to $125 million, according to Acutus CEO and co-founder Randy Werneth.

The money will be used to advance the company’s 3-D imaging technology, the first in a suite of tools for doctors performing heart procedures. The company’s first product creates a virtual map of a patient’s heart. The map refreshes in real-time with every heartbeat, giving doctors a better picture of what’s happening inside the heart chamber.

That insight can be critical to doctors performing cardiac ablation, a procedure used to treat an irregular heartbeat condition called atrial fibrillation, or “AFib.” The condition sometimes causes the heart rate to quicken to scary levels, allowing blood to pool and clot over time, and sending many people to the hospital each year.

It’s estimated that about 2.7 million Americans suffer from AFib, according to the American Heart Association. Those numbers are expected to increase as baby boomers age, widening the market for Acutus Medical’s new tech.

The company’s 3-D map can be particularly helpful to doctors performing cardiac ablation on AFib patients. The procedure involves threading a thin, flexible tube into the heart chamber and burning or freezing tiny areas of heart that are firing off abnormal electrical impulses. Deadening the tissue can relieve symptoms for AFib patients and improve quality of life.

But current technology to map the heart chamber is underdeveloped, and sometimes doctors can’t target the right areas of the heart to destroy.

“Presently, (doctors) are only able to map the inside of the heart chamber by actually touching the heart wall with a catheter one location at a time,” said Steve Hochberg, Deerfield management partner, in a statement. Deerfield joined the financing as a new investor. “This limitation prevents the (doctor) from truly seeing the AFib in a complete, full chamber, high-resolution view, leading them to treat the patient via an empirically-based approach versus an evidence-based approach.”

Acutus Medical will tap into several converging cardiac market trends with its new tech, including imaging during surgical procedures, 3-D and real-time imaging, as well as the expansion of tools for electrophysiology (a branch of cardiology that deals with the diagnosis and treatment of heart rhythm disorders).

The company’s first product — called the AcQMap High Resolution Imaging and Mapping System — includes a catheter used to create a 3-D image of electrical activity in the heart, paired with a computer console loaded with the company’s proprietary 3-D software.

Acutus Medical’s new tech is quite a leap in functionality compared to the current, decades-old technology. Doctors currently use a system that stitches together the electrical impulses of 20 to 30 heartbeats to get a general picture of the heart chamber during a procedure. The picture is often inaccurate, possibly leading to the 40 percent to 60 percent failure rate of ablation therapy, according to a recent study published in the New England Journal of Medicine.

“You wouldn’t even take your car to a mechanic who had that kind of success rate,” Werneth said.

The technology was not originally designed to be a map for doctors to monitor electrical activity in the heart chamber, Werneth said; it was only meant to help doctors navigate the catheter inside the heart.

The key difference of the Acutus system is the ability to map the heart in detail and then see the effects of the therapy in real-time. After the doctor zaps the tissue, a new map is rendered upon the next heartbeat, allowing the doctor to confirm how the therapy changed the electrical pattern inside the heart. This real-time feedback loop can continue until the doctor is satisfied the procedure has been successful.

In November, a clinical assessment of AcQMap was published in the European Heart Journal. It discussed the imaging of three patient’s hearts with the AcQMap, as well as with a conventional 3-D system (Acutus competitors Abbott, Medtronic, and St. Jude all market cardiac-imaging systems). The small study found that AcQMap was a four-fold improvement over conventional maps, which it said was a “clinically significant improvement in mapping performance.”

Although Acutus declined to disclose its sales projections for the AcQMap device, the market for electrophysiology devices is estimated at $4.4 billion this year, and is growing by almost 10 percent annually. 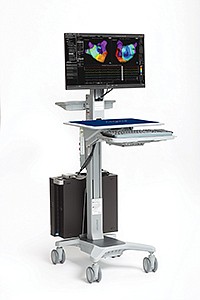 Acutus will use the new funding from this latest round to further develop its pipeline of products for electrophysiologists. Werneth said he plans to gain U.S. Food and Drug Administration clearance for the AcQMap in the early half of 2017. The company is further along in gaining a CE mark, the European equivalent of FDA clearance. Werneth expects the company to receive its CE mark next month. A commercial launch is expected shortly after approval.

Werneth said Acutus will take on commercialization of the device solo rather than partnering with a larger firm. The company has already hired a couple dozen sales reps in Europe, Werneth said.