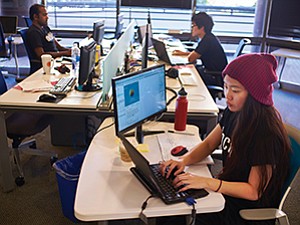 San Diego — Coworking has been one of the fastest-growing entrepreneurial trends of the last decade, and downtown San Diego is no exception.

In 2005, there were just a handful of coworking spaces across the country. Today, there are over 2,000. San Diego alone has dozens of these trendy office spaces, with a particular tech concentration downtown.

These shared work environments are modeled like gym memberships: members pay a monthly fee for a space to work or collaborate. The spaces are often used by “digital nomads” to connect with others on a regular basis — think freelance writers, graphic designers, programmers and app developers.

The office may simply be a large, open room where people work at couches or long tables. Increasingly, coworking spaces are also offering perks like education, supportive and collaborative services.

The rise in coworking spaces is driven both by attitudes of millennials and globalization in big business, says Felena Hanson, who leads the San Diego Coworking Alliance.

“Big companies like Qualcomm Inc. — who employ tens of thousands of employees — are finding that it’s difficult to be nimble with such a large workforce,” Hanson said. “And when you’re competing on an international scale, you need to get that ship moving quickly.”

Hanson said companies like Qualcomm have shifted toward contract-based workers as projects come and go.

Market research on the U.S. workforce revealed that 30 million people classify themselves as independent workers, either as full-time solo entrepreneurs, or part-time entrepreneurs who pick up work for extra income. That number is projected to grow to nearly 40 million by 2019.

A popular downtown coworking space in San Diego, Co-Merge, is reportedly closing down as the building’s owner intends to lease the space to a single tenant.

However, CyberTECH, which operates four incubators downtown, is expanding and planning to absorb some of Co-Merge’s members.

CyberTECH has 16,000 square feet of space (twice the size of Co-Merge) and is now the largest coworking space in the region, according to CyberTECH founder and chairman Darin Andersen.

“I think coworking and incubators are red hot right now, and we are aggressively expanding to meet an exploding market need,” Andersen said.

CyberTECH’s newest space, NEST, is one of at least nine other coworking spaces downtown.