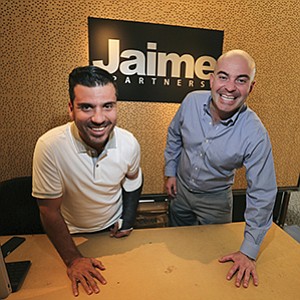 San Diego — Alfredo Jaime and Rodolfo Farber set out from Mexico with the same idea in mind for the construction industry: bringing their client’s visions to life.

“On both our ends, construction was very interesting to us for the capacity it gives us to create, to create something that’s tangible and you can see in the community,” said Farber, 40.

Farber was born in San Diego but raised in Mazatlán, Mexico, until he was 18. He studied civil engineering in college and got his master’s degree in construction engineering and management from the University of California, Berkeley. He arrived in San Diego at 25.

Jaime moved to San Diego at 17 after living in Ensenada, Baja California. At 18, he started working in construction. After working as a carpenter, foreman and project manager, he started his own company in 2002 as a contractor.

“That was the start of the Jaime [company] experience here in San Diego, doing building projects, restaurants, remodels, a little bit of subcontracting and framing,” said Jaime, 39. “It was little by little that I started dealing with brokers and entrepreneurs, so I figured that building, that was my niche.”

In 2011, Jaime teamed up with Farber, who he met through mutual friends, to found Jaime Partners Inc. Farber was a welcome addition to the construction management side of the company, which incorporated in 2012. Jaime serves as chief operations officer and Farber serves as chief executive officer.

“We can understand what you need, and then we can be flexible enough to put it to work and tell you what you actually need to make it happen,” Farber said.

The company’s current projects include BNIM, an architectural firm establishing an office in San Diego, The Hilton Chef’s Table at the Hilton San Diego Bayfront, Wings Restaurant at the Cross Border Xpress and Craft & Commerce, a gastropub downtown.

“The fact that we’re 100 percent minority owned and we can do such exceptional projects, it’s amazing,” Farber said.

Harrison also hired Jaime Partners for a food court going into the Cross Border Xpress. Construction will start this summer. Within that space, Jaime Partners will manage and build out roughly 10,000-12,000 square feet.

“I’ve been here my whole life, 58 years,” Harrison said. “There’s not a whole bunch of companies that do full design-build on retail stuff. They’re unusual and they take the smaller stuff and get them done.”

Jaime Partners’ founders are looking to grow their company to $12 million in revenue this year.

“Five years from now, we hope to be around $30 million,” Farber said. “Hopefully, with the right business strategy and development and with the support of the professionals we have in place, we can get there.”

Company description: Design-build company of builders and construction managers who assist throughout the building process

Key factors for success: Focus on partnering with clients, embodying the owner’s vision for the project in their work and aligning their company values